The Iranian community in Melbourne is “devastated” and “anxious” over the potential for an escalating conflict between Iran and the US, community leaders say.

Iranian community members say they are worried about relatives still in Iran. Many say they are in shock and fear that the US might attack Iran if the conflict escalates. 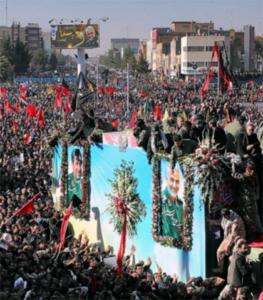 A spokeswoman for the Australian Iranian Society of Victoria said there had been “a lot of tears and lot of worry” about the latest developments.

“People in Iran don’t want war, they want peace. We’ve been through war and we know what it means. It’s not something the Iranian people are looking for,” Ms Gholizadeh said.

She said many Iranians in Australia were worried about their families in Iran.

“We are organising counselling session for people who are worried and under great pressure over what is happening,” Ms Gholizadeh said.

“I can tell you that 75 million of the 80 million Iranians want peace not war.

“And people outside Iran are worried about their families, about visa issues and about whether they will be able to ever go back to the country.

“People are upset because Iran is very far away and it takes time to contact people there and find out what is going on.

“There have been a lot of tears and worry because Australia is a home but Iran is also our home. Part of our hearts will always belong to that country,” Ms Gholizadeh said.

Melbourne based Iranian refugee Hadi Mohammadi said the situation in Iran was “not good”.

“Before the latest crisis, there was trouble and unrest with the people unhappy with the government. Now things might get even worse. We don’t know what will happen,” Mr Mohammadi said.

He said he was in daily contact with his two sisters in Tehran.

Iranian-born Melbourne businesswoman Nara Tabai said she was worried about her three sons, who still live in the capital Tehran.

“My three boys are in Iran. I call them every night and I’m worried about what will happen,” Ms Tabai said.

She said that her sons told her they could “smell war”.

“They are saying that in Tehran, lots of people are leaving the city, there are queues for petrol, no one in the markets and for three says there has been no school or university,” Ms Tabai said.

Another Melbourne-based Iranian woman said she was concerned about the prospect of a war.

“I am very concerned about the current situation which is unfolding between Iran and the US. I believe that current regime in Iran is pro-war in order to rescue the government,” said the women, who asked to remain anonymous.

“Recently, people took to the streets and thousands were killed. Many people are against the current regime and they are put to this situation so they should be worried about war or they would stand up against the government,” she said.

“I spoke to my mother who lives in Tehran after this news broke. She was very frightened and was shaking. My uncle told my mother that there were long queues for patrol at around 4am in the morning.

“She said that my family also think that as soon as the shops open, people will rush to the stores to get food and save. They are worried that there might be food shortage soon. They also said that people are thinking to leave Tehran for smaller cities or villages because they are worried that Tehran might be the centre of war if it happens.

The crisis was sparked when top Iranian general Qassem Soleimani was killed in a US drone strike on January 2. In retaliation, Iran has launched missile attacks on two US air bases in Iraq.