Migrant death on the Mediterranean top 20,000

The migrant death toll in the Mediterranean Sea has risen to 20,014 since 2014 following tragic foundering of a vessel off the coast of Libya last month, according to the International Organisation for Migration (IOM).

A statement from the IOM’s Missing Migrants Project said that the disappearance and presumed drowning of at least 91 people reported missing aboard a dingy north of Garabulli, Libya, on February 9 is the latest in a series of so-called ‘ghost boats’ that have vanished en-route to Europe, claiming hundreds of lives. 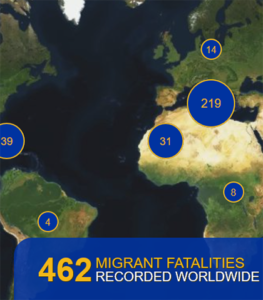 “Two-thirds of the fatalities we have recorded are people lost at sea without a trace. The fact that we have reached this grim new milestone reinforces IOM’s position that there is an urgent need for increased, comprehensive SAR capacity in the Mediterranean,” the statement said.

Ghost boats, also called ‘invisible shipwrecks’, are usually reported by NGOs such as Alarm Phone and Caminando Fronteras, which receive calls from migrants in distress at sea, and family members searching for lost loved ones. In dozens of similar cases recorded by IOM, no search and rescue operations are ever carried out, and those on board are presumed to be lost at sea.

“If you come from a high-income country, efforts will be made to find and identify your body should you go missing. The same simply does not apply if you are a migrant in the Mediterranean,” the IOM statement said.

“With each passing year, more families find themselves living in limbo, not knowing whether a relative is dead or alive,” it said.

In addition to the tragedy off the coast of Libya, the bodies of three young men washed up on a beach in Tunisia last week. They are likely linked to a ship carrying 18 people that departed from Algeria on 14 February, the fate of which remains unclear.

Although the annual number of deaths has decreased every year since 2016 when more than 5,000 lost their lives crossing the Mediterranean, the proportion of deaths compared to attempted crossings rose in both the Central and Western Mediterranean in 2019 compared to previous years – a continuation of the increasing risk of death seen since 2017.

The Missing Migrant Project tracks incidents involving migrants, including refugees and asylum-seekers, who have died or gone missing in the process of migration towards an international destination.

It counts migrants  who have died at the external borders of states, or in the process of migration towards an international destination, regardless of their legal status.

The Project records only those migrants who die during their journey to a country different from their country of residence.

Missing Migrants Project data include the deaths of migrants who die in transportation accidents, shipwrecks, violent attacks, or due to medical complications during their journeys.

It also includes the number of corpses found at border crossings that are categorized as the bodies of migrants, on the basis of belongings and/or the characteristics of the death. For instance, a death of an unidentified person might be included if the decedent is found without any identifying documentation in an area known to be on a migration route.

Deaths during migration may also be identified based on the cause of death, especially if is related to trafficking, smuggling, or means of travel such as on top of a train, in the back of a cargo truck, as a stowaway on a plane, in unseaworthy boats, or crossing a border fence.