Migrants continue to be lost on Mediterranean crossing

The Italian Coast Guard recovered the bodies of 13 people, all women, who died after a crowded migrant boat capsized in heavy weather off the coast of the Mediterranean island of Lampedusa this week.

The latest tragedy comes as more than a thousand migrants and refugees have died in the Mediterranean Sea so far this year, the sixth year in a row that the toll has been so high. 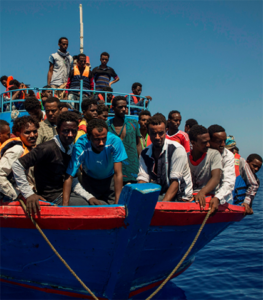 The UN’s refugee agency UNHCR has called it a “bleak milestone” and called on European Union (EU) member states to reactivate search and rescue operations and acknowledge the crucial role of aid groups’ vessels in saving lives at sea.

“The tragedy of the Mediterranean cannot be allowed to continue,” a UNHCR spokesman said in a statement.

The Lampedusa tragedy followed the discovery of the bodies of five migrants on Morocco’s Atlantic coast near Casablanca on Monday, bringing to 12 the number killed when their boat capsized days before.

In 2016, the EU struck a deal with Turkey to close off refugee and migrant flows to Greece from Turkey.

Migrant departures, are now largely via Libya and other parts of North Africa and have fallen sharply from a peak of more than 1 million in 2015 to some 78,000 so far this year, according to UNHCR figures.

“The numbers of people attempting to cross the Mediterranean are much lower but the losses point to the fact that the journeys themselves are much more dangerous,” the UNHCR spokesman said.

“It is also worth highlighting that 70 percent of the deaths actually occur on the central Mediterranean, namely people attempting to get from Libya across to Italy or Malta.”

More than 18,000 people have lost their lives in Mediterranean crossings since 2014, according to figures from both the UNHCR and the website of the UN’s International Organization for Migration (IOM).

Meanwhile, a Syrian toddler drowned at a beach in southern Greece after the boy wandered away from his parents and exited a migrant camp.

Greek police said the boy was 2 ½ years old and drowned Sunday after leaving the camp in the city of Andravida in the western Peloponnese region.

The incident sparked comparisons with the death of Alan Kurdi, a three-year-old Syrian boy of Kurdish ethnic background whose image made global headlines after he drowned in September 2015 in the Mediterranean Sea.

He and his family were Syrian refugees trying to reach Europe amid the European refugee crisis.