Migration should be incorporated into planning for global sustainable development and used as tool to facilitate development and the improvement of opportunities for people across the globe, according to a raft of new research.

The research papers point out the danger that, as migration emerges as a global issue, development policies will be used only as a means of controlling or deterring migration. 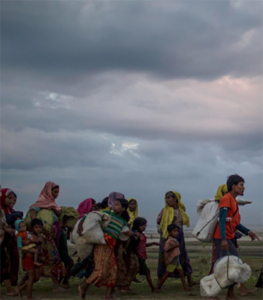 And they address the issue of how foreign aid is being used to deter migration from low-income countries rather than approaching it as tool to eradicate poverty.

A research briefing published in the medical journal The Lancet argues that migration is transformative for both those who move and for the places and economies of source and destination.

“Since migration is a major driving force of planetary and population health, we argue that it must be more directly incorporated into planning for sustainable development, with a focus on the extent and way in which the Sustainable Development Goals (SDGs) incorporate the transformative reality of migration,” the report’s authors say.

“Migration processes can have positive and negative effects on social transformation. There are widespread concerns, for example, regarding the effect of rapid urbanisation driven by migration on the sustainable use of resources in cities,” they say.

“However, migrant populations have been shown throughout the world to be on average healthier and more economically active than host populations, at least with current migration patterns.

“From an economic perspective, migration is often a driver of economic growth: whether economic growth is itself sustainable thus becomes the key question,” said lead author Professor Neil Adger, of the UK’s Exeter University.

The report says that within the UN’s Sustainable Development Goals (SDGs) migration is recognised as a “multi-dimensional” reality that is relevant to countries of origin, transit and destination.

And that migrants are known to be economic assets and help drive growth but the SDGs refer only to the benefits to the country of origin in the form of remittances and from international workers.

Overall the SDGs have a static concept of human populations, and don’t consider migration in the context of sustainable development, climate resilience and social transformation.

“Incorporating the potentially social transformative nature of migration into policy and planning for sustainable development would better reflect the reality of a mobile world. A more encompassing view of migration would, we argue, lead to more appropriate targets and indicators for the SDGs,” the report’s authors say.

“In summary, the SDGs need to move beyond the implicit assumption that sedentary lives are the norm and that it is only safe, orderly, and regular migration that contributes to sustainable development. We suggest that, when migration is incorporated as an inherent and continuing part of social transformations, it will become central to long-term climate resilience and adaptation,” they say.

Another paper produced for the UN by UK-based think tank The Overseas Development Institute also explores how migration can help achieve the UN’s SDGs.

The paper, titled ‘Migration and the 2030 Agenda for Sustainable Development’ recognises that while the full potential and nature of the relationship between migrants and their places of origin and destination is not fully understood, migration can play a role in achieving the goals of the SDGs of promoting safe, orderly and regular migration and holistic sustainable goals.

The paper argues that migration is a powerful poverty reduction tool.

“Labour migration   Labour migration can reduce poverty for migrants themselves, their families, and their origin and host countries. Migrants and their families benefit from increased income and knowledge, which allows them to spend more on basic needs, more reliable and modern energy services, access education and health services, and make investments,” the paper says.

It says that migrants can contribute to the provision and delivery of services in host countries.

“Migrants contribute to better service provision and make vital contributions to host countries as workers and consumers. These potential benefits are stifled when access to basic services is denied or limited, undercutting the potential positive benefits of migrant contributions,” the paper says.

It also concludes that the risks to and vulnerabilities of migrants are often overlooked and the implementation of existing support programs are often weak.

“Access to basic services, such as health, education, social protection, water, sanitation and energy, are key for migrants’ livelihoods and development prospects. But while in some cases migrants can access such services through existing or specifically designed interventions, the implementation of such programmes is often weak and levels of uptake low,” the paper says.

It also argues that data collection on migration has major gaps.

“… data is often not disaggregated by migrant status or comparable across different groups and countries. As a result, we do not know the share of migrants actually able to participate in social protection programs, access health, water or energy services or attend school,” the paper says.

“The poor visibility of migrants in data limits understanding of their needs and reduces the accountability of governments and service providers. The collection and monitoring of this disaggregated data, accompanied by migrant-specific indicators, is vital to understand the vulnerabilities and needs of migrants.

“Only then can governments and non-governmental organisations design migrant specific and sensitive support. Unfortunately, there are no internationally standardised approaches for collecting this data, and coordination of the data that different actors have already collected is limited,” the paper said.

It argues broadly that development policies and program could be part of a comprehensive strategy to better manage migration and make the most of its economic and social benefits.

To do this, the researchers say, migration must be better integrated in the delivery of the 2030 Agenda across all its objectives.

“In order to ‘mainstream’ migration into the 2030 Agenda, the links, opportunities and challenges related to migration under specific goals and targets need to be identified and highlighted and considered in policy processes,” they say.

To do this, the researchers say, a new narrative is needed focusing on what they term the ‘three I’s’: Investment, Innovation and Inclusion.

“Beyond aid or remittances alone, we must focus on investing in future societies for all, in line with the leave no one behind imperative. This includes harnessing the potential of diaspora, civil society innovators and entrepreneurs as private sectors and civil society,” they say.

“We need to build and expand on the initiatives that already exist especially at local and country levels: diaspora bonds, global skills partnership, and the extension of rights for citizens on the move, financial inclusion through digital technology/mobile money, training and skills, etc.

“Finally inclusion is key for development and migration policies to be inclusive and not targeted at specific groups alone. They also need to be aimed explicitly at expanding rights and opportunities. In practice, there is a need to broadening access to services, ensure portability of benefits and expand access to inclusive finance,” the researchers say.