More than 8,000 refugees from Syria have arrived in Iraq in recent weeks after Turkish forces targeted Kurdish-controlled areas following the withdrawal of US troops, according to the UN’s refugee agency UNHCR. 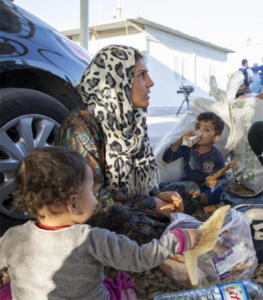 Around 75 per cent of the people fleeing are women and children, including unaccompanied minors, a UNHCR statement said.

The statement said that many “require psycho-social first aid” and that some had witnessed the violence that has been occurring in the region this month.

The refugees are primarily being housed at a camp at Bardarash, in Iraq, which is being managed by the local Board of Relief and Humanitarian Affairs, a UNHCR partner.

The UNHCR statement said the refugees were being provided hot meals, transportation, shelter and identification of unaccompanied minors, among other resources, and that the camp at Bardarash has “a water network, an electricity grid and a sewage system”.

However, the statement said those networks at the Bardarash camp need to be expanded as more people arrive.

The arrivals detailed by the UNHCR began a week after President Donald Trump announced US troops would be withdrawing from northeast Syria, leaving behind Kurdish forces with whom they had been allied with in the fight against ISIS.

Two days after Trump’s announcement, on October 9, as US troops were withdrawing, Turkish President Recep Tayyip Erdogan announced a an operation had begun in northeast Syria with the aim of ridding the area of “terrorist threats”.

The operation targeted many of the Syrian-Kurdish forces the US had supported.

Meanwhile, a deal between Turkey and Russia has seen an end to the fighting with a ceasefire declared.

Turkish troops in the area seized since the offensive began will remain in the area and Russian soldiers and the Syrian army will control the rest of the frontier.

Moscow and Damascus will supervise the removal of Kurdish fighters and weaponry to the depth of 18 miles (29km) from their current positions on the border before 26 October, after which joint Russian-Turkish patrols will begin across the entire border area to a depth of six miles, with the exception of the de facto Kurdish capital, Qamishli.

Observers say the deal effectively redraws the map of northern Syria and ends five years of semi-autonomy carved out by the local Kurdish administration and its military forces.

The deal came after Kurdish officials reached an agreement with President Assad, their former enemy, for military reinforcements to fend off the Turkish attack.