An innovative new program is bringing together students from Melbourne’s Jewish and Islamic communities to build bridges and foster respect and acceptance.

The ‘Museums Together’ project is seeing a hundred students from King David School and Sirius College come together to share experiences, culture and knowledge of their respective religions. 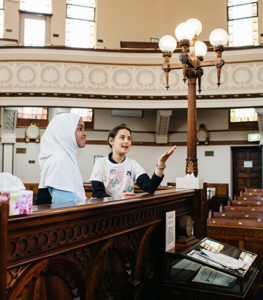 It aims to go beyond educating each group about their commonalities and differences to build real bridges between communities so future generations might respect and accept each other, and stand against intolerance and racism.

The program started with a session at the Immigration Museum which allowed the students from the two schools to get to know each other as well as learn about the concepts of respect, active listening and what identity is.

Developed by educators from each museum, Museums Together will run across five sessions in collaboration with the Immigration Museum, Melbourne Playback Theatre Company and St Kilda Shule. It has been tailored to integrate with the Victorian Civics and citizenship, ethical capability, intercultural capability and personal and social capability curricula.

Jewish Museum Spokesperson Emma Elbridge said the session engaged all of the children.

“The King David School students hosted their counterpart son a tour of the museum and spoke them about Judaism. They also talk about their family stories and the students all enjoyed as Israeli feats together,” Ms Eldridge said.

She said the Sirius College students will host King David School at the Islamic Museum in November.

“We have had incredibly positive feedback on the program from the communities and it will be running next year as well. It is wonderful to see friendships forming between the children,” Ms Eldridge said.

“It has been a really positive experience for everyone and it is one way we can work to counteract racism,” she said.

Jewish Museum of Australia Director and CEO Rebecca Forgasz said the Museums Together program was an important way of promoting understanding between Jews and Muslims.

“By starting with Students, we hope to break down barriers and open hearts,” Ms Forgasz said.

“We are incredibly proud to be undertaking this project, which has the potential for significant impact at and individual and community level,” she said.