A raft of recent research shows that common perceptions about the movement of people across borders bears little resemblance to reality.

Studies by the Amsterdam-based International Migration Institute, the World Economic Forum and the Sahel Research Group at Florida University show political debates have fuelled the growth of xenophobic movements. 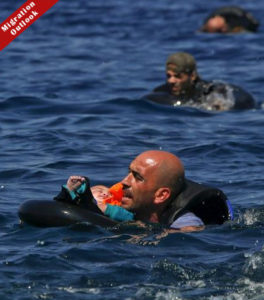 The research shows publicity and media coverage about African migration is dominated by thousands of people risking their lives, and often perishing, trying to cross to Europe in small, vulnerable vessels.

But the reality is that in 2017, around 19 million Africans left their country for another African country, while 17 million went elsewhere but did so legally, the researchers say.

Only a small, undocumented minority tried to migrate to Europe or other parts of the world, they say. And the African Union reports that only one in five African migrants actually abandons the African continent.

The researchers say debate, media coverage around irregular migration is often framed around people seeking economic opportunity but war or violence in general is just as important.

“Although poverty always plays a part in motivating people to leave their country, it is by no means a principal factor,” they say.

“The poor often are too poor to migrate – hence the much more significant presence of low middle-class people seeking opportunity among the migrants.

“In Niger, one of the poorest countries in Africa, nine in ten citizens say they wish to remain at home, while in Nigeria, which is more developed and has a large, emerging urban community, half the population is tempted to go elsewhere,” the researchers say.

Every region of the world has pull factors that attract migrants, the researchers say.

“In Latin America it tends to vary according to the fortunes of the different countries, but at one time Argentina and Venezuela were huge magnets for other Latin Americans.

“In West Africa, the Ivory Coast, a vibrant economy compared to its neighbours, has been attracting migrants for several years,” the researchers say.

Further south, not surprisingly, South Africa attracts people from other countries. As in other parts of the world, the presence of communities of foreign origin has given rise to xenophobia.

Nigerians, for instance, have been targeted in South Africa. Other countries that receive significant numbers of newcomers are Uganda, Nigeria itself, and Kenya.

“This internal migration is in stark contrast with the perception, in countries such as Italy, France, or even Spain, that Africans want to massively move across the Mediterranean and invade Europe,” the researchers say.

“It is true that northern Africans, who were once under the control of France and other empires, have links and geographical to the old colonial powers, where immigration was once encouraged by governments desperate to import labour,” they say.

The real story of African migration, apart from the obvious humanitarian tragedies in the Mediterranean, has little to do with the headlines and everything to do with domestic dynamics that the outside world barely understands.