BBC and Sky News in the UK have been hit with backlash after airing live footage of a ‘sinking’ refugee boat attempting to cross the English Channel.

A BBC reporter did a live cross from the English Channel off Dover where he filmed a group of Syrian asylum seekers ‘bailing out water’ from the vessel as they made their way towards the English coast. 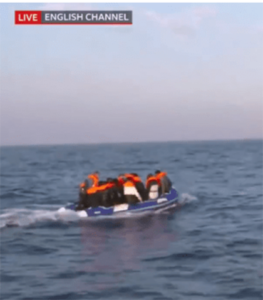 ‘We came across this boat about half an hour ago, just spotted it on the horizon,’ he told viewers.

“We have seen them trying to get water out of the boat. They are doing that at the moment. They’re using a plastic container just trying to bail out the boat, so obviously, it’s pretty overloaded there.

“They are motoring through the Channel. The boat seems to be safe and the engine seems to be going,” the reporter said.

The report continued to develop when the UK Border Force arrived.

Many people have hit out at the coverage on social media, branding it ‘sick’. One even called for resignations and apologies.

“What purpose does this serve, other than to promote the racist narratives and confected panic surrounding asylum seekers? Poor show yet again,” blasted one online commentator.

Meanwhile, the UK government has militarised its approach to stopping boats cross the English Channel.

A Royal Air Force surveillance plane flew over the channel recently as the government seeks to stop a growing number of people making the hazardous crossing from France in small boats.

Britain’s Conservative government has talked tough amid a surge in the number of migrants crossing the Channel during recent warm summer weather. More than 650 have arrived so far in August — including 235 in a single day last week — with pregnant women, babies and unaccompanied children among them.

“Be in no doubt what’s going on is the activity of cruel and criminal gangs who are risking the lives of these people taking them across the Channel, a pretty dangerous stretch of water in potentially unseaworthy vessels,” UK Prime Minister Boris Johnson said recently.

Migrants have long used northern France as a launching point to get to Britain, either in trucks through the Channel tunnel or on ferries.

Before the coronavirus pandemic, the UK’s strong economy and need for farm and restaurant labour drew migrants from around the world who could speak some English.

Some have turned to small boats organised by people smugglers because coronavirus lockdowns have reduced opportunities to stow away on ferries and trucks.

Conservative and right-wing figures in the UK have claimed that asylum seekers are “swarming” into the country.

But the UK is home to just 1 per cent of the world’s 29.6 million refugees. Asylum seekers make up a very small percentage of overall migrants to the UK with study and work cited as the main reasons why people want to come to the country, according to research from Oxford’s Migration Observatory.

Some of those travelling to the UK from France have only been in France for a matter of days, and some brought by smugglers from countries such as Iran or Iraq do not even know which European countries they have passed through.