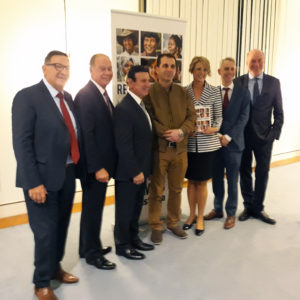 Speaking at the event was one of the book’s subjects and former Iraqi refugee Asseel Yako.

Asseel told of his journey working as a doctor as Islamic State invaded northern Iraq and then fleeing his home and finding temporary refuge in Jordan.

His daily work was tending to battlefield wounds suffered by soldiers or militia members fighting ISIS or patching up women children horrifically injured in explosions of gunfire.

“It was dangerous simply getting to work. There were bombs, kidnappings and people were killed on the street,” Asseel said.

“A friend of ours – a surgeon – just disappeared one day,” he said.

Asseel and his family fled their home in Qaraqosh in August 2014 as ISIS occupied the city.

He is now working as a registrar at Warragul Hospital, in Gippsland, as he continues on a pathway to becoming accredited as a specialist here in Australia.

AMES CEO Cath Scarth told the gathering the book gave insights into the refugee experience and also celebrated the contributions refugees were making to Australia.

Sen Keneally cited passages from the book pointing out the many community groups around Australia that support refugees; while Mr Broadbent, who is Asseel’s local member, spoke of how his community has welcomed refugees from around the globe.

The event was co-hosted in a bipartisan spirit by Sydney Liberal MP Trent Zimmerman and Adelaide Labour MP Steve Georganas.

AMES Australia recently hosted the launch of a study into settlement outcomes for recently arrived Syrian and Iraqi refugees. 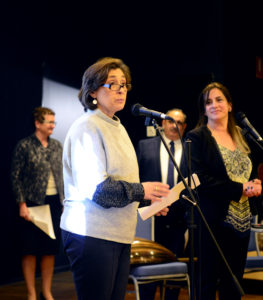 The event at Epping Memorial Hall saw around 80 members of the local Syrian and Iraqi communities hear the research result, enjoy delicious food and listen to traditional Iraqi music.

Carried out in partnership with the University of Technology, Sydney, the study found refugees who have come to Australia as result of the conflict in Syria and Iraq are overwhelmingly happy and feel safe and welcome but they are struggling to find work, according to the first survey of settlement outcomes for this group of new arrivals.

Launched by environment minister and local state MP Lily D’Ambrosio, the data showed that Syrian and Iraqi refugees living in Victoria feel the most welcome and feel they have the best schooling arrangements.

They are also largely proficient in English, happy with the amenities in their local communities and their children’s schooling arrangements, the study found.

But the survey also found many have struggled so far to find paid employment.

The survey – carried out by researchers from the University of Technology Sydney (UTS), Western Sydney University (WSU), the University of Sydney Business School and AMES Australia – canvased 200 families who have settled in Victoria, NSW and Queensland about their lives in Australia.

The families are among the special one-off intake of refugees from the Syrian conflict that was announced by the then Prime Minister Tony Abbott in 2015.

Victoria was also the only state to record no one saying their schooling was “bad” with 62 per cent saying it was “very good” or “excellent”.

Lead researcher Professor Jock Collins, of UTS, said that all of the refugee parents in Victoria thought there was a bright future for their children in Australia and three out of five adults, or 59 per cent, said they were “very happy” or “mostly happy” with their lives in Australia.

AMES Australia CEO Cath Scarth said it was pleasing that all of the newly-arrived Syrian and Iraqi refugees in Victoria were very thankful for the opportunity that Australia provided for them of a safe haven.

She said all of the families interviewed in Victoria were very satisfied with the on-arrival services provided to them and their families by AMES Australia.