AMES Australia recently welcomed a delegation from Thailand’s Ministry of the Interior.

The group was in Australia to gain an understanding of refugee settlement practices here and meet members of refugee communities from Myanmar who have spent time in camps in Thailand and then been resettled in Australia. 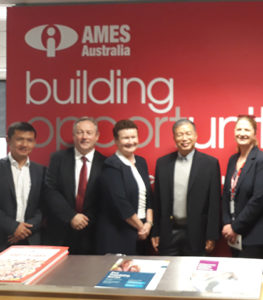 Thailand is implementing settlement policies as increasing numbers of refugees are settling outside of the camps in the broader Thai community.

The group visited AMES Australia’s Dandenong site where they met members of the Rohingya and Chin communities. AMES Settlement Team Leader Lesley Eksteen spoke to the group about case management practices and the challenges particular groups of refugees faced.

Werribee Park was also a destination for the group where they met members of the Karen community who volunteer in the gardens.

The delegation heard from the communities about their concerns for compatriots still living in camps and the opportunities there may be for them to gain work rights in Thailand.

AMES in the running for major award

AMES Australia is a finalist in a major award promoting social justice and the environment.

In partnership with Parks Victoria, AMES has been shortlisted for the ‘Working Beyond the Boundaries’ project at Werribee Park in the Environmental Justice category of the Premier’s Sustainability Awards.

The project has seen the regeneration of the historic garden at Werribee Park while also providing work opportunities, social, physical and mental health benefits to refugee and other local communities. 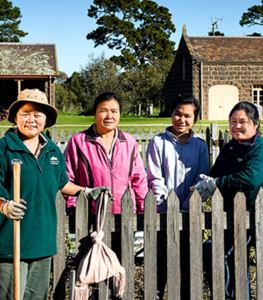 “This year’s finalists showcase an array of diverse innovation, including: a settlement agency that has regenerated an historic garden through the work of local refugees (AMES Australia and Parks Victoria),” the award citation reads.

The ‘Working Beyond the Boundaries’ project is aimed at alleviating issues of mental illness and depression connected with feelings of dislocation and isolation among refugees.

It is also aimed at giving refugee communities an opportunity to work in gardens in the fresh air, gain work experience and an improved sense of self-worth; while also providing a pathway to education and employment.

About 40 members of Victoria’s Iraqi and Syrian communities recently attended a seminar on workers’ rights facilitated by AMES Australia in partnership with Maurice Blackburn Lawyers and supported by Business Bloom International.

The session gave participants AMES Australia clients an introduction to the rights of workers in Australia, as well as the law surrounding employment, work and transport injuries, superannuation insurance, and immigration law. 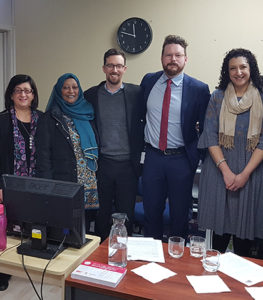 Mary Hanna of Mary Hanna Lawyers joined the panel to lead a component of the seminar focussing on immigration law.

The conversation was translated by Nawal Semaan, Course and Career Advisor at Business Bloom International.

Feedback from those in attendance was very positive, and suggested a genuine appetite in immigrant communities for similar educational seminars.

“Sharing legal knowledge and extending access to justice is at the core of Maurice Blackburn’s business. We’re proud of our partnership with AMES Australia, and look forward to delivering similarly valuable events into the future,” Hugh said.