Nine years of conflict in Syria – a stocktake

Nine years ago this month Syria, descended into war.

The conflict war has destroyed some of the oldest cities in the world, killed upwards of half a million people, and contributed to the greatest refugee crisis since WWII. 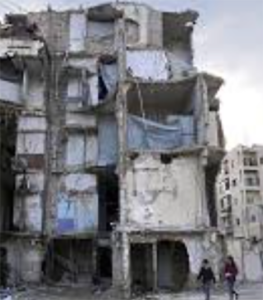 The fighting, which continues into a tenth year, began as an internal conflict when a peaceful uprising against the country’s authoritarian ruler – Bashar al-Assad – escalated after a brutal government crackdown.

The initial protests were sparked by the arrest and alleged torture of 15 schoolchildren, who graffitied revolutionary slogans in the southern city of Daraa, inspired by the “Arab Spring”.

But the war is no longer a conflict between those for and against Assad. It quickly became a proxy battleground for foreign powers, and a site of religious and ethnic conflict, as well as a civil war.

Since 2015, Russia has provided President Assad with significant military support, as well as protection within UN forums.

An ally of Syria’s since the cold war, Russia claims to target “terrorists” only, but there is evidence of attacks against civilians.

Iran is also a long-standing supporter of Syria’s Shia, Alawite ruler. It has provided elite soldiers, weaponry and intelligence to his war, as well as training Shia militiamen from groups such as Hezbollah.

This alliance has been ruthless, cornering the opposition over a nine-year assault that has included mass-tortures, airstrikes and chemical weapon attacks.

The opposition to Assad is based around the Free Syrian Army (FSA), founded in 2011 by Syrian army defectors.

It is now an umbrella for various rebel groups, united in their opposition to Assad. These range from pro-democracy fighters to more conservative factions such as Hay’at Tahrir al-Sham.

The opposition has had military support from Turkey, plus financial aid from Saudi Arabia and Qatar, who fear Iran’s growing influence in the region.

They have also received support from the US, UK and France, but this has weakened over time, particularly since President Trump’s administration in the US.

Then there are the Kurds – a Middle Eastern ethnic group populating the mountainous borderlands of Turkey, Iraq, Syria, Iran and Armenia.

Although they count around 30 million, they have never had a country of their own, and have often suffered as minorities.

Today, it is defended by the Syrian Democratic Forces (SDF): an alliance between the YPG, YPJ (the Women’s Protection Units) and Arab, Turkmen, Armenian and Chechen militiamen.

In 2014 the SDF became engaged in another conflict with Islamic State (IS).

That year, IS expanded from Iraq into the Syrian city of Raqqah, initiating a lengthy war. The SDF recovered Raqqah in 2017, and finally declared victory over IS in March 2019, in the city of Baghuz.

They were supported by a global alliance of 79 countries led by the US; in fact American troops fought alongside the Kurds for years.

But after IS’s defeat, President Trump ended military support for the SDF and announced a withdrawal of troops. Although US troops remain in Syria, their former allies were left exposed and a new front in the increasingly complicated war began.

Three days after Trump’s announcement, in October 2019, Turkey attacked Rojava. Turkey has supported Syrian rebels since the start of the war, including military enforcement since 2017, but this has not extended to the SDF.

But Turkey has a turbulent history with Kurds, who constitute almost 20 per cent of its population. Since the 1970s, The Kuridstan Workers’ Party (PKK) has pursued an armed struggle for independence in Turkey, resulting in 40,000 deaths and many more displacements.

Turkish President Recep Erdoğan fears Kurdish autonomy will fuel separatism within Turkey, something the government has fought for decades.

Meanwhile, in the south, the Syrian government faces a further threat from Israel which has launched hundreds of airstrikes from the occupied Golan Heights, targeting Syrian institutions and Iranian military bases.

As well as regional rivalry, one of Israel’s major concerns is Iran’s support of Hezbollah, a Lebanese group formed to fight Israeli occupation.

Layers of foreign involvement in the conflict has produced a complex and protracted war that seems to continually defy attempts at a peace settlement.

President Assad’s attempts to take Idlib has resulted in almost a million people being displaced since December alone in the biggest exodus the war has seen so far.

Displacement camps are overflowing and children have died from cold.

Turkey is heavily involved in supporting the rebels, who have successfully beaten back the Syrian Army in spite of its strong Russian enforcement.

On 5 March 2020, a ceasefire was agreed between Presidents Erdoğan and Putin. It is not clear if it will hold.

Over the nine years, besides the 6.3 million Syrians internally displaced, six million have scattered across the globe. But borders are tightening, and it is increasingly difficult to find refuge.

With Assad’s grip on power strengthening, Syria remains a dangerous place for those unable to find refuge elsewhere.

For millions of asylum-seekers, there is no country in which they can legally and safely exist.