The number of internally displaced people (IDPs) around the world has reached an all-time high of 50.8 million, according to a new report from the Internal Displacement Monitoring Centre (IDMC).

The Global Report on Internal Displacement (GRID) estimates that 45.7 million people are living in internal displacement as a result of conflict and violence in 61 countries, the majority in Syria, Colombia, the Democratic Republic of the Congo (DRC), Yemen and Afghanistan. 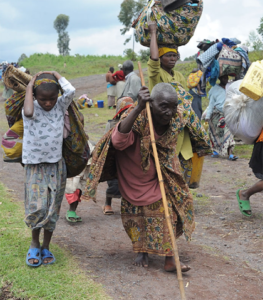 Another 5.1 million in 95 countries are displaced because of disasters. This includes 1.2 million people displaced by years of drought and floods in Afghanistan, more than 500,000 by monsoon rains in India and 33,000 whose lives are still uprooted a decade after the devastating 2010 earthquake in Haiti.

“The global coronavirus pandemic will make them more vulnerable still. It will compromise their already precarious living conditions, by further limiting their access to essential services and humanitarian aid,” Ms Bilak said

Contributing to these record figures, 33.4 million new displacements were recorded in 2019, the highest annual figure since 2012. Some 8.5 million took place in the context of conflict and violence in countries like Syria, DRC, Ethiopia, South Sudan and Burkina Faso.

“Year after year, conflict and violence uproot millions of people from their homes. Collectively, we are failing by epic proportions to protect the world’s most vulnerable. Politicians, generals and diplomats must rise above stalemates and seek ceasefires and peace talks, not guns and grenades.  In this age of coronavirus, continued political violence is utterly senseless,” the report said.

The findings of this year’s GRID do have some positive signs. Efforts to prevent and respond to internal displacement were visible in many countries in 2019. Several in Asia showed that displacement in the form of pre-emptive evacuations saves lives, and that effective early warning systems and other measures to reduce disaster risk avert the worst impacts of disasters, the report said.

National systems to collect and analyse displacement data were put in place in Indonesia, Mali and Sri Lanka, and development approaches to resolving the issue were launched in Ethiopia and Somalia.

The UN secretary general established the High-Level Panel on Internal Displacement, an expression of global political commitment, and three more African countries ratified the Kampala Convention, the continent’s unique and legally binding framework on the phenomenon.

“The GRID shows that measuring and understanding a problem is the cornerstone of efforts to resolve it, but resources and political commitment are also needed if IDPs are to make tangible progress in re-establishing their lives,” Ms Bilak said.

“As the coronavirus pandemic casts an unforgiving light on the urgency of our task, we hope the lessons documented in this report will prove useful in our collective efforts to end internal displacement,” she said.