Clampdowns on low-level people smuggling has turned the industry into a multi-billion dollar global bonanza for organised crime, according to new research.

And as legal avenues for migration have shrunk due to COVID-19 related restrictions, movement has increasingly been facilitated by organised smuggling groups, the research says. 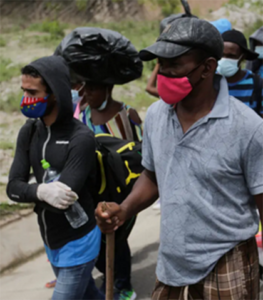 The study by the EU funded ENACT group, shows that most human smugglers in Africa are low-level operators.

“They often come from the same community as their clients, and their interests are aligned in the safe journey of the migrant. The industry therefore enjoys considerable local legitimacy,” said lead researcher Lucia Baird.

The United Nations Protocol against the Smuggling of Migrants by Land, Sea and Air defines human smuggling as enabling the illegal entry of a person into a state for financial or material gain. This distinguishes it from human trafficking, where people are moved against their will or under false pretences for the purposes of exploitation, she said.

“But shrinking opportunities for legal migration and enhanced focus on border control have heightened demand for smugglers, and driven the market to professionalise, putting the lives of vulnerable people at risk,” Dr Baird said.

Between 2014 and 2019, 7,500 migrant deaths were recorded in Africa, and Africans counted for a significant portion of the 19,000 migrants who died trying to cross the Mediterranean. These are likely to be significant underestimates.

In line with global trends, African governments tend towards a criminal justice approach and focus on the supply side by targeting smugglers, the study, titled ‘Human smuggling in Africa: the creation of a new criminalised economy?’, says.

“States would do well to heed lessons from the failed war on drugs, where prohibition built a booming black market and attracted organised crime,” Dr Baird said.

“Policies that militarise borders and close down legal routes to migration make people more reliant on smugglers. More legal and safe routes would lessen the risks and harms experienced by migrants, reduce profit for human smugglers and make the industry less attractive to organised crime,” she said.

The African Union’s Agenda 2063 vision of open borders is a long way from national political and economic realities, with most states still tightly controlling their frontiers.

Only four states have ratified the AU’s Free Movement of Persons Protocol, well short of the 15 countries required to bring it into force.

Forty African states have ratified the UN’s Smuggling Protocol, but far fewer have criminalised migrant smuggling in line with the protocol’s definition, which requires the intent of the smuggler to be material or financial benefit.

Dr Baird says incorporating smuggling crimes in immigration laws severs the link between smuggling and organised crime, encouraging criminalisation of the migrant rather than the smuggler.

“A number of concerning trends have emerged in the approach taken by African states to the criminalisation of smuggling. First, 16 African states impose mandatory minimum sentencing for human smuggling, ranging from one to 15 years,” she said.

“Yet smuggling is a complex crime where too often the wrong people are targeted. Low-level smugglers and migrants often bear the brunt of punitive policies, while crime bosses and corrupt officials go unpunished. This makes mandatory minimum sentences inappropriate and disproportionate.

She said a second worrying trend in Africa relates to one of the pillars of the smuggling protocol which protects migrants. It prohibits the prosecution of migrants merely for using smugglers’ services. Yet most African states exclude this prohibition, risking wrongful criminalisation of the migrant.

“Indiscriminate law enforcement responses to smuggling risk driving the market from an informal side business, with low risks and low profit, to a full-time criminal enterprise with profits invested back into the criminal economy,” Dr Baird said.

ENACT works to mitigate the impact of transnational organised crime (TOC) in Africa on development, governance, security and the rule of law.