The federal government has promised multicultural communities will be included in future policy decisions around the response to, and the recovery from, COVID-19.

In an online forum with more than 100 leaders from diverse communities, Prime Minister Scott Morrison and Immigration, Citizenship, Migrant Services and Multicultural Affairs Minister Alex Hawke have promised to make sure communities were informed and included in the vaccine rollout, that issues around aged care would be addressed in the federal budget and that victims of family violence would not lose their visas. 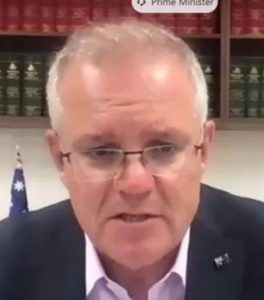 But the government made no promises about the lifting of overseas travel restrictions, saying the uncertainties and dangers of the global pandemic were still too great.

But the pair said that partnering with multicultural communities would be “the key to much of our success”.

Minister Hawke said 2021 would be another “unprecedented year” and the Prime Minister foreshadowed another “pandemic budget”.

But both stressed the unpredictability and potential fluctuations in the pandemic response in terms of flight availability, vaccination rollouts, the effectiveness of vaccinations and possible second and third waves.

Mr Morrison told multicultural leaders that vaccination was not a “silver bullet” which will magically lead to the opening of Australia’s borders.

“What we don’t want to do is find Australia in a situation like so many other countries where people can’t go out, go to work, go and participate in important cultural events in their communities, go visit family and do all of these things,” he said.

The Prime Minister said two million Australians have already been vaccinated, more than half directly by GPs. In coming weeks, GPs will be able to vaccinate those over 50 with AstraZeneca and, for those under 50, “supplies of our Pfizer vaccine are proving to be very reliable”.

Mr Hawke said the vaccine rollout would come to a head in the second half of the year and that partnering with multicultural communities would be key to its success.

“So many religious and social leaders have come forward and put their positions publicly at the start of our cooperation,” he said.

He also pointed to information available in 66 languages via SBS as well as via government websites.

Mr Morrison dispelled myths circulating in some communities that vaccines were having different outcomes for people of different races, and that people of colour will have more side effects from vaccines.

Mr Morrison said: “we’ve received no medical advice to suggest that there should be any different treatment whatsoever”.

“Dealing with these myths is difficult. It is difficult in the CALD communities, but it is difficult more broadly,” Mr Morrison said, urging people to visit the official information at health.gov.au/covid19vaccines, available in 63 different languages.

Asked about the tragic situation in India and the severity of the outbreak there, Mr Morrison said that repatriation flights have been paused for a few weeks.

“We’ve already brought home, through our facilitated or directed flights, some 20,000 people from India,” he said.

In total, since the end of October, 140,000 people have come through Australia’s hotel quarantine system.

He said it had held up extremely well although conceding there had been 13 breaches.

Community leaders at the forum expressed concern for international student visa holders, who have already had their visas granted, but who are unable to enter the country with many having deferred their studies because of poor internet services in their home countries.

Mr Hawke said the government had from the beginning made changes for students to be able to study offshore.

“Providers are going out of their way to enable offshore learning, and that is working. At this difficult stage of the pandemic, we will have to continue with that,” he said.

“We have had so many discussions during the course of this about to how we can safely return students and we will continue to do this as we move through this. As the Prime Minister pointed out, we’ve got our vaccination rollout, other countries have their vaccination rollouts; we are building robust travel arrangements between countries over time however we should recognise that that will take more time than what we have right now,” Mr Hawke said.

He said that conversations were taking place with education providers and students as to what more can be done.

“We are very committed to the return of students as soon as we can, and we’ll keep working on that,” he said.

Community leaders at the forum highlighted the issue of increased levels of domestic violence during the pandemic.

Mr Morrison assured the forum that: “people experiencing family violence will not have their visa cancelled if their relationship breaks down because of family and domestic violence”.

“This is a very important change that we’ve made because this is often used as a threat over women experiencing violence in these situations, when they’re told that they’ll lose their visas if they tell people, and this is not the case,” he said, pointing out how the pandemic has made domestic violence more acute as, in many cases, “victims have been locked up with their abusers,” he said.

Mr Morrison talked of 910 Australians who passed away as a result of COVID-19, the overwhelming majority of those in aged care.

He hinted that the problems associated with aged care during the pandemic would addressed in next month’s federal budget.

“The government has already committed about half a million dollars in response to the interim royal commission report into aged care in November 2019, and, in March this year the government committed another 452 million,” Mr Hawke said.

He said the government’s formal response to the royal commission would be tabled by 31 May.