A new podcast tells the story of Melbourne-based Afghan photo-journalist Barat Ali Batoor and his work in highlighting the plight of asylum seekers and the repression of ethnic minorities, including his own Hazara people.

Born in Pakistan, Batoor moved to Afghanistan as a photojournalist. His parents fled the country in the early 70s because of the discrimination they experienced as Hazaras, an ethnic minority group in Afghanistan that has faced political, economic and social repression for more than a century. 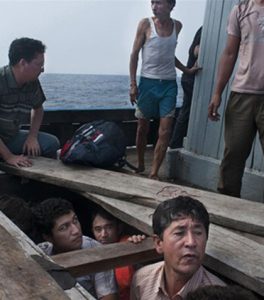 In the podcast, Barat takes listeners on his gripping journey — one that reached its apex when he documented the injustice done to the ‘Dancing Boys’ and the practice called ‘Bacha Bazi’ a tradition found across Afghanistan involving the sexual exploitation of boys.  He was forced to flee to find safety, like other journalists and whistle blowers who face threats to their life from exposing the wrongdoings of those in power.

Batoor also won the inaugural ‘Photo of the Year’ in the prestigious Nikon-Walkley Press Photography awards in 2014. It was the vindication of a career spent giving a voice to the vulnerable.

Barat Ali Batoor’s photo ‘The First Day at Sea’ was entered as part of a photo essay on asylum seekers travelling the people-smuggling route from Indonesia. It was published in the Global Mail.

Batoor accompanied a group of asylum seekers on a hazardous and ill-fated boat journey from a remote Indonesian island to Christmas Island in September, 2012. On the trip the boat started to sink and Batoor and others swam to a nearby island where they were arrested by Indonesian police.

The podcast also unpacks the difference between a political asylum seeker and a refugee, in an attempt to better understand why two thirds of the refugees in the world have been waiting roughly 20 years or more for their cases to be resolved.

It also dives into the experience of the Hazara population, historic context into the political instability in Afghanistan and the danger attached to Barat’s work.

Listen to the podcast here: