Refugee ark in the Deep South

The small American town of Clarkston, Georgia, is the self-proclaimed ‘Ellis Island of the South’.

In the past 25 years the town has received more than 40,000 refugees. Successive waves of settlers have come from Syria, The Congo, Bhutan, Eritrea, Ethiopia, Somalia, Sudan, Liberia and Vietnam. 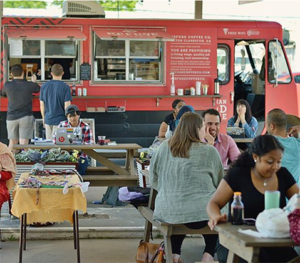 Until the Trump Administration’s hollowing out of the US’ refugee programs, Clarkston had been accepting 1500 refugees a year.

And the town’s reputation as a diversity hot spot has also brought middle class, professional Americans back to the town which has seen its population grow from around 5,000 in 1990 to 13,000 now.

“Clarkston has welcomed more than 40,000 refugees from every corner of the world over the last 40-plus years, and their home grown businesses make our city unique,” Mr Terry said.

“But more than that, they’ve turned a once-fading community, situated in the suburbs east of Atlanta, into a safer, more prosperous place for everyone. The same thing is happening in other small towns and rural communities where refugees settle, across every state in the union,” he said.

So enamoured of his town’s diversity is Mayor Terry that he moved his office out of City Hall.

He holds meetings at places like the Refuge Coffee Co.

“The bright red coffee truck, the smell of freshly made Ethiopian sambusas, and residents from all over the world eating, drinking, and laughing together: It exemplifies everything that makes our community great,” the mayor said.

“I love spending my office hours there and at all the other businesses around town owned by Americans of all stripes. These great Clarkston companies have employees originally from all over the world,” he said.

But Clarkston may become an outlier as President Trump reduces the number of refugees resettled in the US to just 30,000 for 2019, the lowest number in more than 40 years, and is considering cutting refugee admission to zero.

In the 1970s, many of Clarkston’s residents moved away during the ‘white flight’ exodus from nearby Atlanta.

But the population decline meant available and affordable housing and over the next decade refugees from Vietnam and other South East Asian countries arrived.

Currently, about 52 per cent of the town’s population is foreign born.

Mayor Terry says his town has lessons for the rest of the US and for the US Government.

“If you listen to how President Trump talks about refugees, you might assume our small town is impoverished and maybe even dangerous,” he said.

“But the opposite is true. Our new American residents are a vital piece of the fabric that makes Clarkston the vibrant community it is. They start businesses, volunteer at and run local organisations like the Clarkston Community Center, and they are civically engaged,” he said.

“Our foreign-born residents have built Buddhist Temples, Ethiopian orthodox churches, and a mosque where their families come together to pray. And their children attend our schools, where they play sports together and prepare for college together.

“Clearly, refugees and immigrants are deeply invested in Clarkston, which is perhaps why they have made the city safer. Between 2006 and 2015, violent crime in our community decreased by 4.8 per cent, while property crime rates dropped a full 8 per cent. This occurred during a period of rapid refugee resettlement due to multiple humanitarian crises around the world,” Mayor Terry said.

“Despite all the evidence that refugees make this nation culturally and economically richer, the Trump administration still wants to limit the number of refugees that our communities can welcome.

“Today, Clarkston is one of the fastest-growing suburbs in the nation, and that’s largely because of refugees. We’re proof that these newcomers are good for our economy, our culture, and our future. To keep them out is morally abhorrent and economically short-sighted. It would hurt everyone who calls this country home,” said Mayor Terry, who is running for the US Senate in 2020.