Refugee engineer on a pathway to success despite COVID setbacks

After being targeted by Islamic extremists in his homeland and forced into near slave labour as an exile living in Lebanon, Iraqi refugee Ramsin Moshi Butrus Kano is finally on pathway to relaunching his career as an engineer in Australia.

He is studying for a Master’s Degree at RMIT after arriving in Australia last year. He had secured a job as an engineer but it disappeared with the advent of the COVID-19 pandemic. 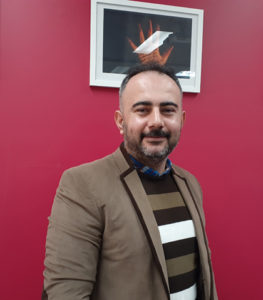 “I was expecting to get a job but the COVID-19 crisis put that on hold,” Ramsin said.

“I was told there was no opportunity right now – not until after the pandemic and its economic fallout,” he said.

“I studied EAL (English as an additional language) at RMIT last February and finished the course. Then I applied to do a Master’s Degree in Civil Engineering at RMIT University. I was accepted but I deferred it because I was expecting to get a job.

“Now, I have enrolled in a full time Masters course beginning this month,” Ramsin said.

Ramsin is an Assyrian Christian from a largely Christian town south of Baghdad called Al Dora. He studied a Bachelor of Engineering in Civil Engineering and had five years’ experience working as an engineer in Baghdad.

Ramsin specialised in in dams and water resources and began his career in 2009.

“My first job was working on the renovation of buildings and after that worked on bridges and then on a water plant for two and half years,” he said.

But when Ramsin took a job as a project manager on some Christian church buildings in his town, he and his family became the target of Islamic extremists.

“It was difficult for us as Christians to work and live in Iraq. We were subject to a lot of discrimination,” he said.

“Because I was a Christian engineer, it was very difficult for me to deal with others and give them instructions for work. When I tried to do my job according to standards my life came under threat.

“Effectively, I was personally subjected to threats from a group of terrorists because I was a Deacon of the Syrian Church of the East and I was an engineer building church buildings.

“They threatened me, saying I should stop work and leave the country.

“They said they would take our homes and churches and destroy them. Also, the government in Iraq was not able to protect us and we were not able tell the government about the threats because it would get back to the terrorists and we would be killed.

“In Al Dora, the terrorists blew up many churches and killed people. The town was targeted because it was the site of Christian theological colleges.

“We suffered greatly; our homes and churches were destroyed in 2007-08. Things got gradually worse until the bad security situation obliged me to leave with my family in December 2014.

“I travelled with all of my family to Beirut in Lebanon and we spent four-and-a-half very difficult years there,” he said.

Ramsin was unable to work as an engineer and took a series of poorly paid, sweatshop labour jobs.

“In Lebanon we didn’t have permission to work in civil engineering; in fact we had no legal permission to stay in Lebanon,” he said.

“I was forced to work in other fields. I worked for a flooring company laying vinyl and marquetry. It was very tiring work. Sometimes we worked from early in the morning until midnight. I was paid $US400 per month but my rent was $US700 per month and I also had to pay for food and water.

“My father and brother were also working in similar jobs so, as a family, we were just able to make ends meet,” he said.

Ramsin studied in English at the American Centre for Language in Beirut when his family began to harbour the hope of coming to Australia.

“I learned a lot and it has proved to be very beneficial,” he said.

Ramsin then went back to work packing food for a catering company. But he and thousands of other Iraqi and Syrian refugees lost their jobs when the Lebanese government banned refugees from working.

“Luckily just as I was sacked from this job in June 2019, our application to the United Nations to be resettled in Australia was approved,” Ramsin said.

From there, things moved quickly.

“We had an interview at the Australian embassy in Beirut on June 19 in 2018 and on July 27 they called us to say everything was OK and our travel was arranged for September 12,” Ramsin said.

“My extended family all came to Australia too, my father and mother and brother and sister. We came together,” he said.

Ramsin says he and his family are fortunate to be in Australia but there are many refugees – victims of the conflicts in Iraq and Syria – living in limbo with their lives and hopes deteriorating daily.

“There are many Iraqi and Syrian refugee families still living in Lebanon and they have been there for four, five, six years suffering the whole time,” he said.

“And after we left, the economic situation and the safety and security situation got worse. There are thousands of people suffering very much.

“They can’t go back because it is not safe, there is no chance to travel somewhere else and no chance to work or study where they are – even children are not allowed to go to school.

“Thank God we left at a critical time – after that everything got much worse,” he said.

Ramsin’s father-in-law is still living in Jordan as a refugee.

“They have been there three-and-a-half years. They can’t go back to Iraq because they will be killed. And they can’t live in Jordan much longer because of the economic situation – and the COVID crisis makes thing harder,” he said.

“There application to join us in Australia has been rejected nine times,” Ramsin said.

“They are among hundreds of thousands of Christians in Jordan, Lebanon and Turkey living with littler hope, waiting to be resettled.

“Many are losing hope and their problems are growing. They face a dark future with no certainty what will happen to them,” he said.

But for Ramsin’s family, arriving in Australia has brought relief.

“The first time in I arrived in Australia, I felt relaxed and safe. Australia is a great country and we are very grateful to be here,” he said.

One his settlement journey in Australia, Ramsin has been supported by refugee settlement agency AMES Australia and particularly by AMES case manager Balsam Hanna.

She met Ramsin when he moved from Melbourne’s west to be close to his family, church and community in the city’s north.

Balsam helped guide Ramsin through the process of getting his qualifications recognised and through more English courses.

“She encouraged me and recommended to me what I should do on my pathway,” Ramsin said.

Balsam said it was a pleasure to work with someone motivated to learn and study and improve their qualifications.

“We devised a plan for Ramsin and his family in terms of his professional career but also in terms of their health needs, schooling, accommodation, orientation and linking the family to the local church and community,” she said.

Ramsin also received support in preparing his resume from AMES’ Employment Pathway Coordinator Solomon Kebede and through the support of Work Broker Madona Awad. He was referred to the not-for-profit organisation CareerSeekers.

CareerSeekers had brokered a job for Ramsin with one of their corporate partners but when the COVID-19 crisis stuck, the job disappeared.

However, Ramsin is determined to continue on his pathway and has started a Masters Degree in Civil Engineering at RMIT University in July.

Balsam said that with the COVID-19 crisis, now was a good time for Ramsin to build skills and further his education.

Ramsin said that having someone to encourage and guide him through the early steps of his new life in Australia had made things easier.

“Balsam and AMES have helped me start a new life here in Australia,” he said.

She walked the journey herself when she was forced to flee Iraq in 2003.

Balsam spent nine months in Turkey before settling with her family in Australia.

“I know what Ramsin and so many other refugees have been through. It is not easy to leave everything behind and leave your home forever,” she said.

“Your miss your family and friends and the life you had but once you are settled here, Australia becomes home,” Balsam said.