The COVID-19 pandemic has fueled a crisis for democracy and human rights around the world and minority groups and marginalised communities are among some of the worst affected, according to a new report.

A study by the human rights advocacy group Freedom House has found that since the COVID-19 outbreak began, the condition of democracy and human rights has grown worse in 80 countries 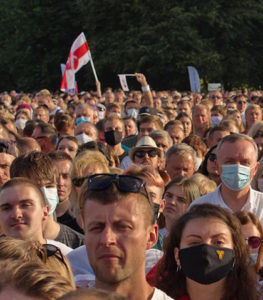 It says many governments have responded to the pandemic by engaging in abuses of power, silencing their critics and weakening or shuttering important institutions – often undermining the systems and norms of accountability needed to protect public health.

The Freedom House research indicates that that the COVID-19 pandemic is exacerbating the 14 years of consecutive decline in freedom around the globe it has already identified.

“Not only has democracy weakened in 80 countries, but the problem is particularly acute in struggling democracies and highly repressive states—in other words, settings that already had weak safeguards against abuse of power are suffering the most,” the report says.

“The findings illustrate the breadth and depth of the assault on democracy. As one respondent on Cambodia put it, “The government took coronavirus as the opportunity to demolish democratic space,” it says.

The report says abuses of power during the pandemic have had a disproportionate impact on communities that were already marginalised, including refugees, migrant workers and asylum seekers.

“Among the experts surveyed, 29 per cent said a lack of protection for minorities and vulnerable populations was one of three issues most affected by the coronavirus response; 25 per cent said new or increased restrictions on ethnic and religious minorities have been put in place as a result of the coronavirus outbreak in their countries of focus,” the report says. 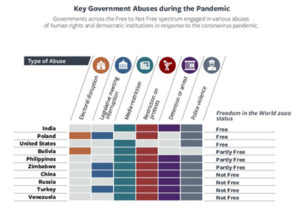 “In some cases, these groups suffered disproportionately because their status put them at greater risk. But the dearth of accountability precipitated by weakened independent media or acquiescent legislative and judicial branches has allowed both state and non-state actors to discriminate against certain groups with impunity,” it says.

“In some countries, lockdown measures have been applied in an openly discriminatory manner to specific segments of the population. In Bulgaria, Romany neighbourhoods were placed under harsher movement restrictions than areas where Roma did not constitute a majority.

“In Kuwait, authorities put greater restrictions on non-citizen neighborhoods than on areas where mostly citizens live. Criminal and rebel groups have also used the pandemic as a pretext to prey on marginalized communities. In Colombia, according to a survey respondent, ‘ethnic minorities had to completely withdraw into their shelters to protect themselves from the virus and with that they found themselves at the mercy of…illegal armed groups’,” the report said.

“In the United Kingdom, news media have reported that Black people and people of Asian descent are detained at higher rates than white residents under new police powers. In Turkey, a respondent claimed that ‘police violence under the cover of COVID-19 audits and checks disproportionately targets minorities’.”

The report also found higher levels of government abuse of power, police violence and suppression of independent media in many countries.

The report said Sri Lanka’s experience illustrates the global trends. It pointed to the government of Prime Minister Mahinda Rajapaksa accelerating its authoritarian agenda over the past six months, stepping up efforts to control independent reporting and unfavorable speech by ordering the arrest of anyone who criticizes or contradicts the official line on the COVID-19.

“Early elections were called but, as the outbreak accelerated, were postponed, leaving the national legislature out of session beyond the constitutional deadline and weakening checks on executive power. Health concerns were also exploited by authorities as a pretext for human rights abuses, especially against the minority Muslim population,” the report said.

Other lowlights outlined in the report include:

China: Increased nationalist and propagandistic rhetoric at home in an effort to drown out calls for transparency and accountability as well as enhanced and innovative technological surveillance. Crackdowns on individuals within and outside the country who share information that contradicts regime messaging, and the persecution of potential critics among the domestic elite.

Cuba: Activists and independent journalists have been willing to risk fines and imprisonment to report accurately on what is taking place in the country. Civil society organizations have also worked tirelessly to maintain accountability in face of new challenges.

Belarus: Mass protests that began in August have blossomed into a major movement for political reform.

The research is based on a survey of 398 journalists, civil society workers, activists, and other experts as well as research on 192 countries by Freedom House’s global network of analysts.