Millions of refugees across the world lack almost all of the material and circumstances needed to protect them from contracting the potentially deadly COVID-19 virus, according to one of the world’s leading humanitarian health experts.

While millions of people on every continent are able to isolate at home and can wash their hands regularly, refugees are among the most vulnerable people in the world. 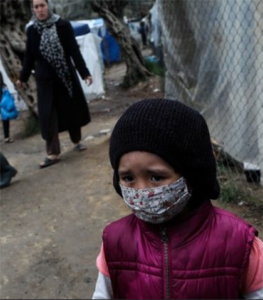 The director of John Hopkins University Centre of Humanitarian Health Dr Paul Spiegel says the conditions in which millions of refugees live are “a perfect storm for COVID-19 to transmit”.

“You cannot social distance from people in a place like this, where there are so many people in such a small densely populated area,” Dr Spiegel said.

Johns Hopkins University has had the eyes of the world on it in recent weeks as it tracks the spread of the COVID-19 virus worldwide.

Only one per cent of all refugee make to permanent resettlement in third countries, according to the UNHCR. Most remain marooned in secondary, neighbouring countries adjacent to their home nation.

More than 80 per cent of the world’s refugee population lives in low-to-middle income countries with may living in crowded and poverty stricken camps or urban settlements.

Dr Spiegel says refugee camps have been the source of much concern for public health and human rights experts, even prior to COVID-19, as many lack adequate resources.

For example, there are almost a million Rohingya refugees – who have fled persecution in Burma – living in camps at Cox’s Bazaar in Bangladesh.

In Jordan, according to reports from the UN’s crisis coordination arm OCHA, refugees are living in houses so small that three people share every room.

Dr Spiegel says that aside from living conditions, adherence to COVID-19 policies is nearly impossible to achieve for refugees. Access to facilities for hand-washing are rare and hand-santiser, masks and other personal protective equipment are impossible to obtain.

There is also poverty. In Jordan, about 80 per cent of Syrian refugees are living below the poverty line. Many refugees are not wealthy enough to stock up on groceries and food, which is problematic as the pandemic has seen shops closed.

Also, in many countries refugees work in construction, retail or manufacturing all of which have been hit hard by the crisis,

In many cases, Dr Spiegel says, friction between state authorities and refugees has created stress for refugees and led to poor compliance with new government regulations and policies.

And in countries with low-capacity health care systems authorities have increased crackdowns in terms of COVID-19 protocols.

Meanwhile, international aid agencies have struggled to initiate relief efforts worldwide. The UNHCR has called for increased UN funding to support initiatives such as increasing access to water and reinforcing health and hygiene services for refugees.

Other organisations, such as the International Rescue Committee, have launched campaigns to combat the spread of misinformation and provide refugees with trustworthy instructions on how to protect themselves from COVID-19

“Segregation and nationalism will only weaken countries who have received refugees,” he said.

Dr Spiegel said that the density in which many refugee populations live is an emerging issue.

“Refugees often live with multiple families in very high population-density conditions. It’s going to be extremely difficult for them to social distance—because there really isn’t anywhere to social distance,” he said.

“Also, refugees are also more likely to have underlying health conditions such as acute malnutrition. Because of this, there is a lot of concern that the COVID-19 infection will affect refugees more severely than people in their host communities,” Dr Spiegel said.

He said there have already been outbreaks in refugee populations.

“These outbreaks are starting. There’s an outbreak in the Greek detention centres for asylum seekers and migrants. In a closed, detention-like setting, the pandemic will spread like wildfire.

“That’s one of the worst scenarios. It is not a good idea to put people in those sorts of conditions. There have also been cases of COVID-19 among asylum seekers and migrants in US detention centres.

“There have been small outbreaks in several other countries as well.

“But as of now, the worst is yet to come as the pandemic expands to the Middle East, Africa, and other parts of Asia because that’s where most refugees are located,” Dr Spiegel said.

He said humanitarian aid agencies and NGOs are trying to adapt to the realities of the pandemic.

“Normally, thousands of people may congregate during a mass distribution of food and supplies. Aid organizations must change that by modifying how and when they distribute supplies.

“They may increase the number of smaller distribution points, or stagger them over longer periods.

“Another major adaptation is task shifting to address the shortage of health care personnel. We have to teach the limited number of available doctors to deal with the most serious cases, nurses to deal with cases that otherwise doctors may be addressing, and lay people to help reduce the risk of infection and deal with those who can be treated at home,” he said.

Dr Spiegel said testing, health services, funding and solidarity were the key to preventing the spread of COVID-19 in refugee communities.

“Testing and services must be provided to everyone within a geographic region, regardless of whether an individual is a national or a refugee,” he said.

“When the outbreak gets to these populations, it will be very serious without external help. And that puts the rest of the world at continued risk. It’s both of humanitarian interest and self-interest to support these countries.

“Also, I would say let’s not use the pandemic as an excuse to increase xenophobia and stigmatisation, or to implement policies such as stopping asylum because refugees are too much of a burden. This pandemic has nothing to do with status—who’s an asylum seeker or refugee—it affects everyone.

“I fear that governments are going to be using this pandemic as an excuse for repressive policies. This should not be the case,” Dr Spiegel said.