Up to a million stateless Rohingya refugees living in overcrowded camps in Bangladesh are facing increasingly precarious circumstances as their host nation appears to be losing patience with them.

The Rohingyas fled their homes in Myanmar’s Rakhine state two years ago in the face of military-led violence against them. 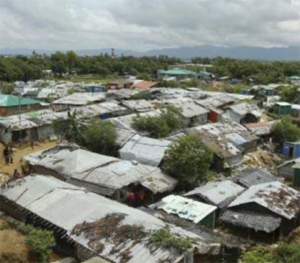 Now, the Bangladeshi government wants to cut off one of their last links to the outside world.

Local authorities also recently blamed Rohingya militants for the killing of a Bangladeshi politician last month and had accused refugees of smuggling drugs from Myanmar.

Human rights activists say the drug trade entices some young men who have no opportunities for employment in the refu­gee camps.

Meanwhile, several Rohingya are reported to have been killed in recent shootouts with police although verifying this is difficult because international media have limited access to the area.

The limits imposed on internet and mobile phone services, along with curbs on aid agencies access to the camps is clear evidence that Bangladesh is growing tired of the Rohingya and is looking for ways to encourage Rohingya to return to Myanmar without resorting to force.

But the mostly Muslim Rohingyas have baulked at two attempts to return them voluntarily to Myanmar, a Buddhist-majority nation that denies them citizenship and many rights and whose army led the violent ejection them in 2017.

The Rohingya are justifiably suspicious of Myanmar’s generals, who remain defiant about the purge.

They believe they have essentially eliminated a threat to the country, according to news reports.

The generals believe militant Rohingya had embedded themselves in villages and towns across Rakhine state. Many of these have been burned bulldozed.

Meanwhile, aid agencies say Bangladesh has overreacted to the tensions and warn that the restrictions on communications jeopardize safety in the camps.

Human Rights Watch said in a statement that Bangladesh faced a challenge in dealing with the refu­gee crisis but had “made matters worse by imposing restrictions on refugee communications and freedom of movement”.

Activists say Bangladesh is penalising the Rohingya after some refugees held a rally in August to commemorate the two-year anniversary of their expulsion and to call on Myanmar to grant them a proper path to repatriation through citizenship.

Since 1982, Rohingya have been unable to legally marry, gain access to education and many jobs, or move freely within Myanmar.

Camp officials who allowed rally faced swift retribution. The head of the Office of Refugee Relief and Repatriation and the official in charge of the camp where the rally occurred were transferred out of their roles.

Bangladesh has also banned two aid groups, including the US-based Adventist Development and Relief Agency, from operating in the camps. The NGO was accused of encouraging the Rohingya to resist attempts to repatriate them and that it had financed the rally – allegations it denied.

Earlier this year, Bangladeshi Prime Minister Sheikh Hasina expressed concerns about the role of NGOs, claiming they were encouraging opposition to efforts to return refugees to Myanmar.

Myanmar has committed to provide a safe space that would allow the Rohingya to return home but it has stopped short of agreeing to grant Rohingya full citizenship rights.

With frustration building among all of the players and solution remaining elusive, the situation in the camps is increasingly tense.