Three years after being forced to flee their homeland, the almost one million Rohingya refugees currently living in Bangladesh are facing a new and frightening prospect.

The Bangladesh Government is planning to move many of them to an island that emerged from the sea just 20 years ago and which sits just two metres above the sea in the path of cyclones and monsoon rains. 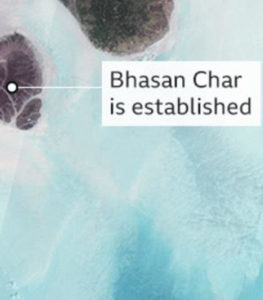 The island of Bhasan Char, located 60km off the coast of Bangladesh, is made entirely of silt, Himalayan sediment washed down river and into the sea.

For the past three years, the authorities have been building a new town, at a cost of $US350 million, with the aim of relocating more than 100,000 refugees in order to ease tensions within the camps at Cox’s Bazar.

Bangladesh’s Prime Minister Sheikh Hasina has frequently defended her government’s plans, urging the international community to understand that, with over a million refugees living in Cox’s Bazar, the escalation in violence as well as both drug and human trafficking shows the camps are no longer safe nor sustainable.

“The crisis is now becoming a regional threat. Besides increasing congestion and environmental degradation, it’s also challenging health and security in the area,” she said at the UN General Assembly last year.

But for many Rohingya, Bhasan Char is closer to a prison than a refuge. All of the 306 refugees living on the island were sent there against their will and none are allowed to leave.

Under pressure from the UN Human Rights Council to stop sending Rohingya to the island against their will, the Bangladeshi authorities have now launched a marketing campaign to promote the island as a spacious and modern alternative to the conditions faced by those living in the camps. 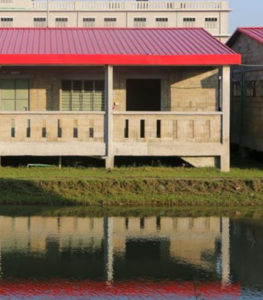 The new settlement is built in a giant grid, with hundreds of rows of red roofed houses. There are security cameras on every house and every corner, reports say.

They say there is plenty of open space, electricity – which they don’t have in Cox’s Bazar – and access to education.

But, earlier this year, Amnesty International released a report on the conditions faced by the 306 Rohingya already living on the island.

It contained allegations of cramped and unhygienic living conditions, limited food and healthcare facilities, a lack of phones in order for refugees to be able to contact their families, as well as cases of sexual harassment by both the Navy and local labourers engaging in extortion.

Many Rohingya are also concerned that the island, at just 6ft above sea-level, is extremely vulnerable to cyclones, monsoon rains and tidal surges.

Authorities say a 14km long seawall has been constructed to protect the island and that experts had established the risk of the island being hit by a cyclone as “very low”.

But there is evidence that suggests two cyclones tracked across or close to Bhasan Char in 1991 and 1997.

Isolation is another thing the Rohingya fear about the island. It is three-hour rough boat ride to the mainland.

“The houses are good in Bhasan Char, but it looks like a prison,” Mr Abdul said.

“In Cox Bazar our family and compatriots are living in a community. But on the island, their freedom would be restricted. They would have to live under surveillance,” Mr Abdul said.