Two years after more than half a million Rohingya people were violently driven from their homes in Myanmar, things have not improved.

The displacement crisis in Rakhine state has deepened into a long-term refugee emergency with a million people now facing an uncertain future in the crowded camps of Bangladesh. 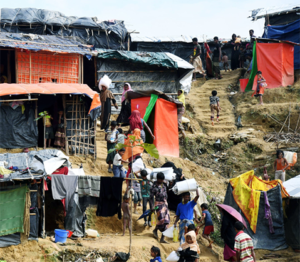 Chances of a return home for most of the exiles are slim. Recently, the Bangladesh and Myanmar tried to begin a repatriation program but there have been very few volunteers.

Part of the reason for this is that for generations, the Rohingya have faced marginalisation and disenfranchisement in in Myanmar.

Most are saying they won’t return home until their rights are guaranteed, but Myanmar does not recognise the community as one of the country’s 135 official ethnic groups.

In August 2017, a military crackdown in Myanmar’s Rakhine State forced out more than 700,000 people.

Rights groups estimate that at least 9,000 Rohingya were killed in the chaotic exodus.

UN investigators this week said Myanmar soldiers had systematically raped women and girls and an earlier UN investigation described that the mass purge as near genocide.

But Myanmar authorities have said they were responding to attacks on border areas by a group of Rohingya separatist fighters.

Now, the cramped refugee settlements of Bangladesh – stretched over hills and lowlands vulnerable to monsoon weather – have the population of a city but little of the infrastructure.

There are mud and bamboo shelters as for homes and there hospitals but not everyone can reach them, especially women. There are makeshift classrooms, but there are also strict limits of formal education imposed by the Bangladesh Government.

There are very jobs and most are in the black economy.

Most Rohingya are dependent on humanitarian aid, but they have little say in how it’s delivered.

The effect crisis the crisis is visible in satellite photography with a massive footprint etched on both sides of the border.

Recently, a second attempt to repatriate hundreds of Rohingya Muslims from camps in Bangladesh failed after the refugees refused to return “unconditionally” to Myanmar.

Bangladesh and Myanmar had agreed to repatriate 3,540 Rohingya from three camps in Cox’s Bazar district starting this month.

The refugees were chosen from a list of containing 22,000 Rohingya in Bangladesh that was handed to a Myanmar delegation in July.

This time, there were no protests but the result was the same.

Bangladesh’s Relief and Repatriation Commission said in a statement the repatriation plan was postponed because of the “unwillingness” of refugees.

The Rohingya have demanded that to return, they want a guarantee of citizenship in Myanmar, freedom of movement, repatriation to their home, the return of and reparations for their properties.

The Rohingya have lived in Myanmar’s Rakhine state for generations, but many Buddhists consider them recent illegal immigrants from Bangladesh.

In various phases since the 1970s, Rohingya have trickled into Bangladesh to escape persecution by successive military governments and elements from Rakhine Buddhist communities.

The 2016 and 2017 military atrocities in response to Rohingya militant attacks on security forces triggered a mass exodus. The UN has described the military action against the Rohingya as “ethnic cleansing”.