Rohingya refugees forcibly removed by Bangladesh authorities from camps on the mainland to a remote so-called ‘prison’ island in the Bay of Bengal have staged protests against their relocation.

The protests on the low-lying Bhasan Char Island, 60 km off the coast of Bangladesh, came as senior United Nations officials paid a visit to the island. 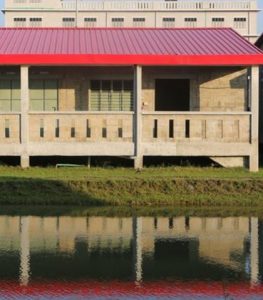 Reports say the protest involved up to 4,000 people and coincided with an inspection visit by high-ranking officials from the UNHCR.

“The Rohingya who are there became unruly the moment the UNHCR representatives landed [on the island] by helicopter today,” local police chief Alamgir Hossain told AFP news agency.

“They broke the glass on warehouses by throwing rocks. They came at the police… Their demand is they don’t want to live here,” he said.

A UNHCR statement said it was “deeply concerned to learn of reports of refugees who have been injured during today’s events on the island. We regret that those affected reportedly include children and women”.

Bangladesh is home to more than a million Rohingya Muslims, who were forced to flee brutal assaults by Myanmar’s military in 2016 and 2017. UN investigators later claimed the military showed “genocidal intent” against the Rohingya. 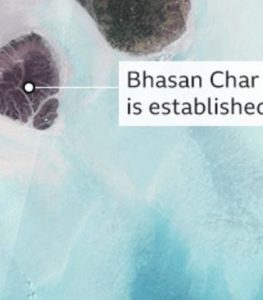 Bangladesh began moving people to Bhasan Char, a previously uninhabited island in December, 2020, they say in a bid to reduce the pressure on the refugee camps around Cox’s Bazaar.

Around 18,500 Rohingya refugees have so far been relocated to the island, and there are plans for it to eventually house 100,000 refugees, at a reported cost to Bangladesh of $300 million.

The relocation plan has prompted concerns about the remoteness of the island, and – at just two metres above sea level – its vulnerability to the cyclones that frequently rage across the Bay of Bengal.

In April, following its first visit to the site, UNHCR urged Bangladesh to slow down its relocation of Rohingya refugees to Bhasan Char until measures to protect residents from storms and flooding were fully in place.

During the first transfers in December, rights groups also alleged that people had been coerced into relocating to the island and recently the US-based NGO Refugees International claimed the move “reflects the shift toward a policy more akin to detention than refuge.”

It said there were serious questions about the informed and voluntary nature of the relocations, saying that that people had been promised Bangladeshi citizenship and other inducements to agree to the move.

The Bangladeshi Government has denied the claims.

And they say there are two schools, a mosque, two 40-bed hospitals and two community clinics under construction.

The officials say there is plenty of open space, electricity – which they don’t have in Cox’s Bazar – and access to education.

But, late last year, Amnesty International released a report on the conditions faced by the Rohingya already living on the island.

It contained allegations of cramped and unhygienic living conditions, limited food and healthcare facilities, a lack of phones in order for refugees to be able to contact their families, as well as cases of sexual harassment by both the Navy and local labourers.