An initiative that supports child victims of the conflict in Syria while also celebrating the nation’s culture, music, poetry and food is returning to Melbourne this year.

#CookForSyria is a grassroots fundraising dinner event celebrates Syrian food and culture as well as raising money for UNICEF’s work supporting children in the war-torn nation returns on October 11. 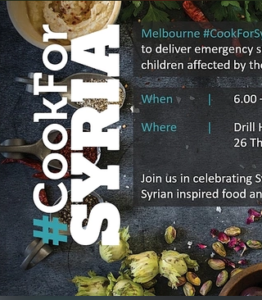 This year young Syrian refugee sisters Sarah and Maya Ghassali are helping to organise the UNICEF event and are inviting Melburnians to join in a traditional Syrian dinner!

“This event is held every year around Australia, and we hope to include as many people as we can to come along and participate in this important cause,” Sarah said.

“At this event, we will celebrate Syrian culture, games, poetry and hear the amazing stories behind both the Syrian community in Melbourne and Australia. There will be Syrian inspired food and everybody is invited to come along!” she said

#CookForSyria is a global fundraising initiative curated by Clerkenwell Boy and SUITCASE Magazine in partnership with Unicef NEXTGeneration London.

It first started in the UK as a simple supper club, where a group of foodie friends came together to celebrate Syrian cuisine and raise money to help UNICEF protect Syrian children.

More than eight years of conflict in Syria has caused one of the largest humanitarian crises of our time. The conflict has left 8.4 million children needing emergency aid – children have lost their homes, their security, and their childhoods.

UNICEF is urgently appealing for funds to deliver emergency supplies, protection and support to millions of children caught in the line of fire and living on the move as refugees.

Melbourne #CookForSyria is hosting a grassroots dinner event on Friday 11th October at Drill Hall at the Multicultural Hub between 6pm and 8.30pm.

For more information or to buy tickets go to: https://events.humanitix.com.au/melbourne-cookforsyria?fbclid=IwAR30GIBoSUOg2J7F_J3YOf5qJyH5UUIqApcl4_o56YCo4f1D0KC4DwbEyaU