Victoria is home to one of the most culturally diverse societies in the world, and is also among the fastest-growing and most diverse states in Australia. 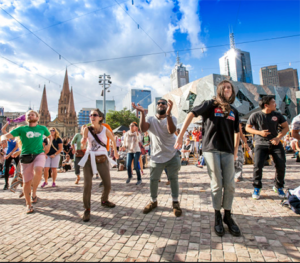 Most of the overseas-born Victorians came to Australia as migrants hoping to find a better life for themselves and their children.

And a large number of overseas-born Victorians came to Australia as refugees from conflicts including: the Second World War in Europe; in Indo-China; in the republics of the former Yugoslavia; the Horn of Africa; the Middle East; and, Afghanistan.

Of Victoria’s total population, 28.4 per cent were born overseas in over 200 countries, 26 per cent spoke a language other than English at home and 59 per cent followed one of more than 130 different faiths.

Victorian’s migration trends are changing. Although the largest groups in 2016 were from North West Europe and Southern and Eastern Europe due to their long settlement history, their percentage shares are declining.

Those born in South-East and North-East Asia, Southern and Central Asia have increased significantly in numbers and percentage share as a result of more new arrivals in the last two censuses.

Not surprisingly, English ancestry still ranks top (23.7 per cent) of total responses to the census, followed closely by Australian ancestry (22.1 per cent).

The census data reveals the City of Greater Dandenong has the highest proportion of its population born overseas, (57.7 per cent), compared to an overall proportion of 28.4 per cent for the state.

Other Local Government Authorities with high proportions of overseas-born include the City of Melbourne (55.7 per cent), Monash (49.1 per cent), Brimbank (47.9 per cent) and Wyndham (41.6 per cent).

The largest three religions: Western Catholic, Anglican Church and Uniting Church maintained their rankings, although they experienced a significant decrease in number of followers.

The other top ranking religions, while not as numerous as the Christian faiths, have experienced significant percentage increases, with Sikhism increasing to 79.2 per cent, Hinduism by 62.3 per cent, Islam by 29 per cent and Buddhism 7.9 per cent.