Former England soccer star and current TV host Gary Lineker television host is to welcome a refugee into his own home in the coming weeks.

The 59-year-old, who played for Leicester, Barcelona and Tottenham Hotspur during his career, has been critical of the UK government’s treatment of refugees trying to cross the English Channel. 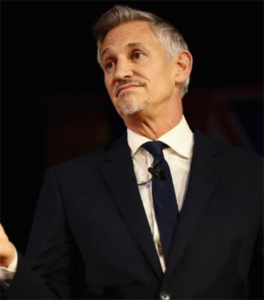 He has called the UK’s approach “heartless and completely without empathy”.

He tweeted recently: “Providing a new start to those who’ve fled their homes represents the best of Britain’s values”.

And also: “As we know refugees have always helped to keep our communities safe and make our society stronger. They even brought us fish & chips. I’m standing with @RESCUE_UK to #StandWithRefugees.”

“They have given so much to this country and still continue to do so in terms of the jobs they do which we have witnessed during the pandemic in the NHS, carers and key workers,” Mr Lineker said in the interview.

He has signed up with the charity ‘Refugees at Home’, which will assess his house before placing a guest with him.

The Refugee at Home program seeks to connect those with a spare room in their house to refugees and asylum seekers in need of accommodation.

“We are so grateful for all the host applications that we receive, but are particularly delighted when people with such a high profile sign up to host,” the website says.

“We hope that by Gary sharing this news with his followers we can spread the word about hosting.”

The former striker said he wasn’t nervous about welcoming a stranger into his house on the outskirts of London.

“I have met scores of young refugees through football schemes and they are genuinely lovely kids and they appreciate any help they can get,” he added.

“I’m sure it will be fine. I have been thinking of doing something like that for a while.

“My kids are all grown up so I’ve got plenty of room so if I can help on a temporary basis then I’m more than happy to do so. Why not?”