Economist Michael Kremer was named recently as one of three winners of the Nobel Memorial Prize in Economic Sciences.

He was honoured for his justifiably lauded pioneering work in studying poverty – one of the planet’s great challenges. 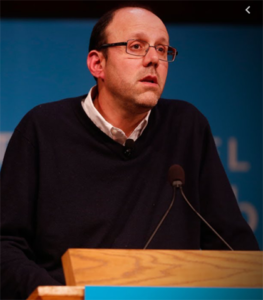 But in 2011 Professor Kremer produced another piece of work – which has been largely overlooked by the mainstream media – on another of our great existential challenges.

His proposal, which seems counterintuitively simple, is that wealthy countries should pay poorer countries to accept more migrants.

In return, the poorer countries would agree to allow the refugees freedom of movement, with no one locked up in locked up in a refugee camps, and the right to earn a living.

Refugees, in turn, might be afforded a degree of choice over which nation to enter. Meanwhile, wealth would be transferred from developed to developing countries.

The paper is predicated on the idea that current arrangements around refugee settlement are not working.

Prof Kremer argues that immigration pressures that have been roiling politics around the world. In the wake of the disaster in Syria and other crises, refugees have flooded Europe.

He says nationalist parties have responded by playing to the sentiment that migrants are stealing jobs. They promise tougher standards for immigrants, a stance with the potential to harm migrants fleeing persecution.

In the US, the 2016 presidential election was influenced by worries about immigration and bogus claims that migrants would steal jobs, he says.

And refugee policy has become a mess, even if with the best of intentions.

Prof Kremer’s argument begins with a reminder that a nation that chooses to accept migrants fleeing political prosecution provides a public good from which other countries will benefit.

The larger the number of countries that provide asylum, the less the incentives for others to do the same. This free-ride problem arises even if all nations are altruistic with respect to political refugees.

Because admission is not costless to the host nation, a country that might otherwise accept a large number of refugees may nevertheless consider itself better off if those who fear persecution find asylum somewhere else.

This creates a problem: The countries that admit political refugees become overburdened and reduce the number of refugees they admit.

As a result, even if every country is altruistic, the number of refugees left to be persecuted in their home countries increases.

The optimal solution, the authors note, is cooperation among host nations.

The trouble is, Prof Kremer argues, that it can be difficult for a potential host nation to tell whether a particular migrant is fleeing persecution or seeking economic opportunity.

Nations tend to be less open to economic migrants because of a fear that the migration will hurt the opportunities for their own citizens and impose other economic costs, he says.

This fear of admitting economic migrants will reduce the willingness to admit political refugees.

The result is the same even if a country would like to grant political asylum to all who deserve it. The difficulty of discerning an individual applicant’s likelihood of persecution means a system of adjudicating claims will be necessary; the fear of admitting a large number economic refugees will lead to a high standard of proof.

Other governments will respond by toughening their own standards for political asylum. The predictable result is a race to the bottom in which, worldwide, fewer refugees are admitted.

This leads to the breakdown of the system envisioned by the 1951 refugee convention.

Michael Kremer is the Gates Professor of Developing Societies in the Department of Economics at Harvard University.