Millions of Syrians are now facing desperate levels of hunger and destitution as well as acute vulnerability to COVID-19, aid agencies report.

Having already endured almost a decade of war and displacement Syrians now face levels of poverty unprecedented even in their strife-torn country. 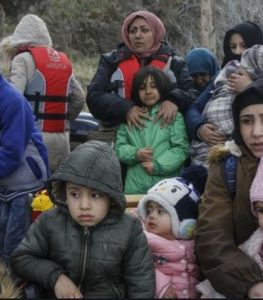 Recent COVID‑19 restrictions, the collapse of the Syrian economy and the displacement of millions of people have led to an unprecedented number of families in Syria who are no longer able to put food on the table or make enough money to afford basic necessities, the NGO Mercy Corps says.

A staggering 9.3 million Syrians are now going to sleep hungry and more than another 2 million are at risk of a similar fate – part of an overall rise of 42 percent in the number of Syrians facing food insecurity in the past last year.

In the northwest, a Turkey-Russia mediated ceasefire hangs in the balance, with fighting and aerial bombardments reportedly ramping up since the middle of the year.

The area is home to more than four million, many of whom have been displaced multiple times, according to the UN’s refugee agency UNHCR.

Idlib and northern Aleppo governorates, among the most fragile parts of the country, now face a potential catastrophe as the first case of COVID‑19 was confirmed on July 10,

Many live in makeshift and overcrowded camps or sleep out in the open. Water is scarce, and the health and civilian infrastructure is largely destroyed. In recent weeks, a new wave of violence in southern Idlib has forced hundreds of families to pack up their few belongings and leave their homes and tents once again.

As the pandemic spreads in Idlib and Aleppo, communities there are already facing growing food insecurity and water scarcity.

To make matters worse, the UN Security Council approved a resolution on cross-border aid to the region on July 11. The decision allows just one border crossing to remain open to deliver critical relief, while closing a second crossing that 1.3 million people in northern Aleppo had relied on for their survival.

In the northeast, the first cases of COVID‑19 were confirmed in April and with it concerns over a lack of preparedness remain high.

Lack of COVID‑19 testing capacity, chronically understocked health facilities, and the main water pumping station – servicing 460,000 people – regularly being out of commission, continue to be the daily reality, according to Mercy Corps.

People living in government-held areas, and Syrian refugees in neighbouring countries hosting refugees face the threat of COVID‑19, the inability to work and the spiralling economic decline of the region, making their situation worse than ever.

“Social distance is a fantasy in a camp, but if we’re going to prevent a massive outbreak, we have to make it a reality,” a Mercy Corps statement said.

“Imagine collecting some of the most susceptible people to illness and cramming them close together in some of the riskiest of living conditions. The disease could spread like wildfire,” the agency warned.

All this has come after the conflict in Syria between 2011 and now created one of the worst human crises in recent history.

Since 2011, over half of Syria’s pre-war population – more than 12.7 million people – have been forced to flee their homes due to conflict.

Families are struggling to survive inside Syria, or make a new home in neighbouring countries. Others risked their lives on the way to Europe, hoping to find acceptance and opportunity. All together, the Syria crisis can feel overwhelming.

Millions of Syrians are now in desperate need of help. According to the UN, $3.29 billion was required to meet the urgent needs of the most vulnerable Syrians in 2019 — but only about half of that has been received.

Here’s how you can help: https://www.unrefugees.org.au/?utm_code=OAWBNDO002&utm_source=google&utm_medium=cpc&utm_campaign=AU_PS_EN_general_UNHCR_CoreBrand&dclid=&gclid=CIGqwfGyz-0CFQmFjgodghQEhA