Most Syrian refugees fear going home while President Bashar Assad and his government remain in power, according to news reports from the Middle East.

Aid agencies say most Syrians in exile in surrounding countries are refusing to go back despite a Russian-backed scheme to get them to return. 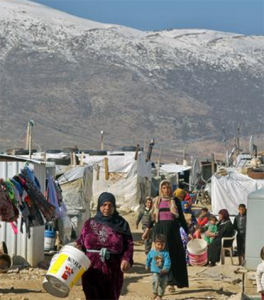 The agencies say the factors back home – safety, having their houses rebuilt, having the opportunity to work and provide bread for their families – are absent.

And many do not expect an improvement on those issues without a political change in Damascus and significant reconstruction. Neither appears likely.

Most Syrian refugees also fear that returning to Syria could mean arrest or forced conscription into the Syrian army, the agencies say.

Another factor is that the Syrian government has imposed a rule that each returning Syrian national must exchange $US100 for Syrian pounds at the official rate.

The policy was put in place in July, ostensibly to help the government replete its foreign currency reserves amid a catastrophic economic crisis. But the move has added another obstacle to prevent Syrians who want to go home from returning.

Syrians living in Lebanon and Jordan, even if they have jobs, rarely earn more than $US150 a month.

Syria’s neighbours Turkey, Jordan and Lebanon host the vast majority of Syrian refugees who have fled the country’s civil war since it began in 2011. Turkey has been home to 3.6 million Syrian refugees as of September 2020, according to the United Nations refugee agency.

A recent conference in Damascus on the current situation in Syria and the conditions for the return of refugees was boycotted by the UN and the European Union.

Observers say the conference was motivated less by concern for the refugees and more by Russian and Syrian political and economic calculations.

Russia has been Assad’s strongest supporter in regaining territory lost to rebels and Islamist militants, particularly Islamic State, since it intervened in 2015.

Meanwhile there are rising concerns about dangers being faced by displaced Syrians living in refugee camps in Lebanon.

More than 1.5 million people have fled from the civil war that has raged in their home country since 2011.

The economic chaos caused by the Beirut port explosion and COVID-19 pandemic have left Syrians in Lebanon in an even more perilous situation.

In Turkey, among the first to lose their jobs and income because of the pandemic were Syrian refugees, according to the UN.

“As refugees were overwhelmingly working informally before the pandemic, these are the first people that lost their jobs and income, without being eligible for short-time work allowance or other unemployment benefits,” said UN development program official Claudio Tomasi in a communique.

And a recent study by the Turkish Red Crescent found that 69 per cent of refugee households reported a loss of employment because of COVID-19.

After the Syrian civil war broke out in 2011, Turkey adopted an ‘open-door policy’ for people fleeing the conflict, granting them ‘temporary protection’ status.

Currently, there are 4 million refugees in Turkey, over 3.7 million of which are from Syria, making it the country home to the world’s largest refugee population.

After Turkey confirmed its first COVID-19 case in March, the country took a host of measures to stem the virus’s spread, including the closure of restaurants, cafes and other service sector institutions.

Although some Syrians are business owners or co-owners with Turkish nationals, a large chunk of Syrians in Turkey work in the service sector. Due to virus lockdowns, many white-collar workers began working from home and holding meetings online, but blue-collar workers could not.