Home » Latest Articles » The Syrian refugee diaspora – where they went

The Syrian refugee diaspora – where they went

In 2011 Syria had population of roughly 21 million. In the eight years since a bitter conflict ravaged the nation, more than half of these people have been displaced, creating the largest refugee population in the world.

More than six million Syrians have fled the country and a similar number are internally displaced persons (IDPs) caught between Idlib province and northern Syria. 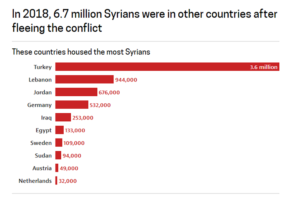 The fall of the city of Aleppo, in 201, sparked the desperate exodus as millions of men, women and children fleeing violence war.

Now, although Syria accounts for less than one percent of the world’s population, its people make up nearly one third of refugees worldwide.

The United Nations High Commissioner for Refugees (UNHCR) last year recorded 6.7 million refugees from Syria, , more than from any other country.

According to the Internal Displacement Monitoring Centre, almost as many Syrians – more than 6.1 million – have been displaced within their own country. Many have been forced to relocate multiple times.

Of those who have fled Syria, the overwhelming majority stayed in the Middle East. The rest have migrated largely to Europe, with a fraction also travelling to North America.

A large number of Syrians have escaped to neighbouring Turkey, which in 2018 supported a Syrian refugee population of more than 3.6 million.

Most have settled in cities such as Istanbul, where they can find work.

But Turkey is now taking steps to reduce the number of refugees in its urban centres and recently moved more than 6,000 Syrians from Istanbul to temporary housing in other provinces.

Turkish President Recep Erdogan has also introduced a controversial plan to send refugees to a ‘safe zone’ in the previously Kurdish-controlled border area between Turkey and Syria.

The influx of Syrians has swelled Turkey’s refugee population to become the largest in the world, according to the UNHCR.

Lebanon supports the second-largest population of Syrian refugees. The UNHCR last year recorded nearly one million Syrians in Lebanon, which practically shares its eastern border with the Syrian capital Damascus and the city of Homs.

In 2018, about one in six people in Lebanon were refugees – the highest density in the world.

Before the war, Syria was a refuge rather than a refugee state – granting asylum to people including Armenians, Kurds, Palestinians and Iraqis.

While more than half of Syria’s refugees remain in the Middle East, millions have also undertaken perilous journeys across the Mediterranean and beyond.

Last year alone, European Union countries took in more than 96,000 people from Syria, roughly a third of the asylum seekers by the EU statistical agency Eurostat.

Most of these people went to Germany, which in 2018 granted protected status to nearly 67,000 Syrians. And, according to the UNHCR, there were more than 584,000 Syrian refugees and asylum-seekers living in Germany last year.

As well as Germany, countries such as Greece, Sweden and Austria are top destinations for Syrian refugees who leave the Middle East. Although the number of people seeking asylum in Europe started to decline in 2017, following a peak of more than a million arrivals in 2016, Syrians remain the largest group of people living in EU countries under protected status.

Tens of thousands of Syrian refugees have also crossed the Atlantic, headed for the United States and Canada. The outflow in 2015 and 2016 overlapped with election years in both countries, sparking political debate about refugee policy.

In the 2018 financial year, the United States took in just 62 Syrian refugees.

Canadian Prime Minister Justin Trudeau vowed to bring 25,000 Syrians into the country by the end of 2015 as part of his 2015 election platform.

Prime Minister Trudeau missed the deadline but Canada has since taken nearly 68,000 refugees from Syria.

In 2015, then Australian Prime Minister Tony Abbott vowed to accept and extra 12,000 refugees from the Syria-Iraq conflict over and above the nation’s 18,750 annual refugee intake.