The UN High Commissioner for Refugees (UNHCR) has called for international action to end the deadly refugee crisis in Libya through the distribution to other countries of refugees stranded there.

UN refugee boss Filippo Grandi urged other nations to follow the agreement sealed by the African Union and Rwanda to set up a refugee transit mechanism for evacuation of vulnerable refugees out of Libya. 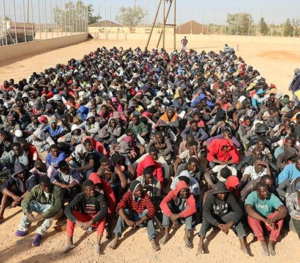 “At this critical time where people are being caught in the escalating conflict inside Libya and many endure appalling conditions in detention, refugees and asylum-seekers need hope and concrete solutions,” Mr Grandi said.

“We urgently need other countries to step forward to help in getting people out of harm’s way and offer solutions,” he said in a statement posted on the UN agency’s website.

More than 3,600 refugees and asylum-seekers are currently held in Libyan detention centres, many at risk of serious abuse and in peril from indiscriminate fighting.

In early July, more than 50 refugees and migrants were killed in an airstrike on the Tajoura Detention Centre, east of Libya’s capital Tripoli.

Aid agencies have reported that conditions in detention centres across the country are unsafe and unhygienic.

“Rwanda, and Niger – where a centre for evacuated refugees from Libya has been operating for almost two years, helping us to secure solutions, including resettlement, for several thousand vulnerable people – are quietly demonstrating real responsibility sharing through the actions they are taking to protect people in great need. They offer hope to refugees, and should be inspiration to us all,” Mr Grandi said.

He also stressed the need for the international community to provide humanitarian corridors for refugees to be evacuated out of Libya and to make protection of the human rights both of refugees and migrants a core element of engagement in Libya.

Mr Grandi repeated the UNHCR policy position that refugees and migrants in detention in Libya should be freed in an orderly manner and their protection guaranteed.

He vulnerable refugees and other individuals at risk should be evacuated to other countries from where resettlement and other solutions must be found.

Mr Grandi also paid tribute to the 16 countries who have stepped up with offers of resettlement.

Of 50,000 refugees registered with UNHCR in Libya, only 4,600 of have been distributed to countries other than Libya.

Under the recent agreement, Rwanda will receive and provide protection to refugees and asylum-seekers evacuated from Libya.

They will be transferred to safety in Rwanda on a voluntary basis. A first group of 500 is expected to include children and youth at risk.

Evacuation flights are expected to begin in the coming weeks, and will be carried out in cooperation with the Rwandan and Libyan authorities.

Meanwhile, the World Health Organization (WHO) has announced medical aid for refugees stranded in remote areas of Libya.

WHO official took to twitter to reveal it has delivered medical supplies through the Libyan authorities to treat around 220,000 patients over three months.