The United Nations High Commission for Refugees (UNHCR) has at last acknowledged formally that climate change as a factor that drives refugees away from their homes. 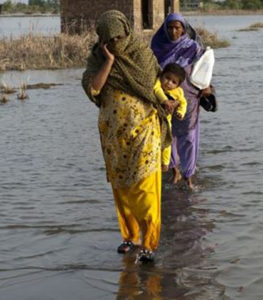 Observers say the acknowledgement is s an important step toward recognising the dangers posed by climate change and its impact on vulnerable communities.

In the past the UN has said that climate change would increase global migration, but it has stopped short of specifically identifying migrants as “climate-related refugees”.

Doing so presupposes that they are unable to return home later, just like refugees escaping long-term political or religious persecution.

“The impacts of climate change are unevenly weighted against the world’s most vulnerable people,” the UNHCR said in a statement released with the report.

“Those who are the poorest, most exposed, and have the least resources to withstand climate shocks and stresses,” it said.

But aid agencies have pointed out that identifying climate refugees in an official report doesn’t afford them tangible support because the legal definition of refugee, under the 1951 Refugee Convention, does not mention climate.

There is a now a raft of research that back the notion that climate change is a major driver of human displacement.

The report says climate change will become the single biggest driver of human migration but also that the worst impacts can still be avoided by prompt action.

Titled ‘Groundswell—Preparing for Internal Climate Migration’, the report says most of the population shift will take place in Sub-Saharan Africa, South Asia, and Latin America.

Another study found that global sea level rises could create hundreds of millions more refugees by 2100, according to alarming new research.

The study by US sociologist Charles Geisler found that by the year 2100, rising sea levels could force up to two billion people inland, creating a refugee crisis among one-fifth of the world’s population.

And worse still, there may not be many places for these refugees to go because inland landscapes have significant barriers to entry for coastal climate migrants.

And research by a team at New Zealand’s University of Otago found that the effects of climate change, including floods and extreme temperatures, have become more important push factors in migration than economic inequality or conflict.

The study examined migration data from 198 countries of origin to 16 member states of the Organization for Economic Cooperation and Development (OECD) between 1980 and 2015.

It found that migration increased after floods and extreme temperature events.