The UN Refugee Agency UNHCR is warning about shortages of vaccines in the Asia-Pacific region, including for refugees and asylum-seekers.

With the COVID-19 pandemic raging in many parts of the world again UNHCR has urged immediate and stronger support for the COVAX initiative, a worldwide effort aimed at achieving equitable access to COVID-19 vaccines. 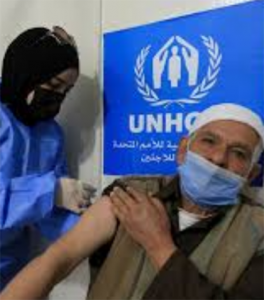 The agency argues this is critical to save lives and curb the impact of the virus, particularly in developing nations.

“These countries host the vast majority of more than 80 million forcibly displaced people in the world. Yet so far, they have benefited from only a fraction of the world’s COVID-19 vaccines,” UNHCR said in a statement.

“UNHCR stresses that no one can be left behind in the global effort against the coronavirus.

“The pandemic will be defeated only when vaccinations become available everywhere on an equitable basis.

“We are particularly worried about the situation in the Asia and Pacific region, which in the past two months has experienced the largest increase in the number of cases globally,” the statement said.

Over the past two months, there have been some 38 million recorded COVID-19 cases and more than half a million deaths.

Fragile health systems in many countries in the Asia-Pacific region have struggled to cope with this recent surge.

A lack of hospital beds, oxygen supplies, limited intensive care unit (ICU) capacities and scarce health facilities and services have worsened outcomes for those infected with COVID-19, particularly in India and Nepal.

“The highly infectious variant of the virus which first emerged in India threatens to rapidly spread in the sub-region, including among refugee populations,” the UNHCR said.

“Refugees remain especially vulnerable to the spread of COVID-19. Overcrowded settings, coupled with limited water and sanitation facilities, can contribute to increased infection rates and an exponential spread of the virus,” the agency said.

In Cox’s Bazar, Bangladesh, where almost 900,000 Rohingya refugees are living in the single largest and most densely populated cluster of refugee camps in the world, the number of cases has soared in recent months.

By May 31, there had been more than 1,188 cases confirmed among the refugee population, with more than half of these cases recorded in May alone.

“We have also seen a worrying increase in the number of COVID-19 cases among refugees and asylum-seekers in Nepal, Iran, Pakistan, Thailand, Malaysia and Indonesia. While efforts are underway to mitigate the spread of the virus, these preventive measures need to be complemented with intensified vaccinations,” UNHCR said.

Some refugees, including in Nepal, have already received their first vaccine dose with COVAX-provided supplies.

But among the Rohingya refugees in camps in Bangladesh, no vaccines have been administered because of the lack of supplies in the country.

“The current delays in vaccine shipments, brought about by limited supplies to COVAX, mean that some of the world’s most vulnerable people remain susceptible to the virus,” UNHCR said.

“We are adding to the calls for countries with surplus doses to donate to COVAX, and for manufacturers to boost supplies to the COVAX facility,” the agency said.

UNHCR says its total financial requirements for COVID include $US455m in supplementary needs and $US469m in COVID-related activities that are included in its regular budget.

To date, including projected contributions, UNHCR has received just $US252.8m or 27 per cent of these requirements.