Unilateral sanctions under the spotlight

Economic and trade sanctions imposed by the US and the west on adversary nations are denying ordinary people in these countries basic rights and even causing deaths, a new United Nations report says.

The report says that in the last four years, under President Donald Trump’s leadership, the United States has ramped up its use of sanctions as a geopolitical tool more than ever. 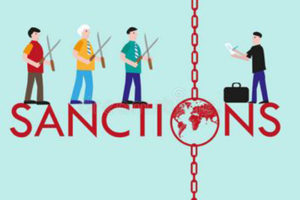 It was written by Alena Douhan, a professor of International Law at the Belarusian State University and UN Special Rapporteur on the negative impact of unilateral coercive measures on the enjoyment of human rights Alena Douhan

Prof Douhan says the use of sanctions is increasing in frequency and scope.

“Their scope, the justifications for them, and the types and number of targets are proliferating. In the process, a broad range of human rights are being violated, even the right to life, as people lose access to essential services, including medical care,” she said.

And while this expansion has been driven largely by the United States, other states and political groupings are following this lead in the kinds of unilateral sanctions they are prepared to use, the report says.

It argues that many are of questionable legality under international law.

“The legality of unilateral sanctions imposed by countries or regional groups is dubious in itself, especially when the sanctions are not authorised by the UN Security Council or go beyond its authorisation – most unilateral sanctions fall into one of these two categories,” the report says.

“With narrow exceptions, the UN Charter designates the Security Council as the sole body that can authorise sanctions to enforce international law,” it says.

“Too often, we face the contradiction that measures introduced ostensibly to deter human rights violations are themselves contributing to those very same violations – and some even create, or worsen, humanitarian crises, for example in Syria or Venezuela.

“It is essential for the world’s nations to act against this harm,” the report says.

It says the harm sanctions can cause to human rights is often immediate and pronounced. During the COVID-19 pandemic, countries under US unilateral sanctions have had difficulty obtaining drugs and medicine to fight the disease.

“Under sanctions imposed by the United States, third-country exporters and entities that finance exports to sanctioned countries can face financial penalties – or be sanctioned themselves for doing business with the country in question,” the report says.

While humanitarian exemptions are usually built into sanctions regulations, using them is complicated, slow, costly and often don’t work in emergencies,’ it argues.

And…“they can be undermined by what they don’t cover, such as fuel for transporting humanitarian goods to sanctioned countries”.

Humanitarian organisations also work in these countries under fear of being subjected to secondary sanctions due to the routine transactions they undertake in the course of their work, the report argues.

The report also examines  so-called ‘targeted sanctions’ which apply against the individuals, companies, and organisations that the sanctioning states believe are directly responsible for a country’s behaviour.

And it argues that these too raise human rights concerns.

“Promoting respect for human rights by violating human rights only undermines the rule of law,” the report says.