US private prisons making a windfall from asylum detention

US private prison companies have emerged as major donors to the election campaign of President Donald Trump, whose policies have seen tens of thousands of asylum seekers locked up.

The profits of private prisons have become inextricably linked to Trump’s immigration policies with two major firms – CoreCivic and GEO Group – benefiting to the tune of about $US1.3 billion last year from contracts with the US Immigration and Customs Enforcement (ICE). 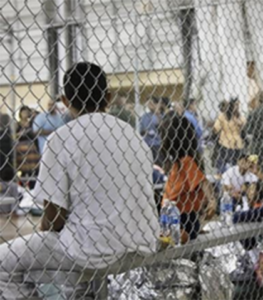 Reports say both companies rely on these contract for around a third of their revenue.

The Democrats have vowed to ban private prisons if their candidate Joe Biden wins the November presidential election.

But the private prison companies are spending heavily to back a Republican win.

GEO Group CEO George Zoley has given $US514,800 to Republicans and just $US10,000 to Democrats during the current election cycle, campaign finance records show.

According to the nonprofit Center for Responsive Politics, people and groups linked to GEO have given more than $US1.7 million, mostly to Republicans.

CoreCivic CEO Damon Hininger has donated $US26,300 during this election to Republicans, reports say.

CoreCivic and GEO told shareholders last week that they have renewed 10-year contracts for three detention centers in Texas, one in Houston and the others outside Austin and San Antonio.

In both states, ICE and the companies side-stepped local opposition, including a California law banning new private prisons. The California agreements were reached days before the effective date of the law, which GEO and the Trump administration are now challenging in court.

Most of the US government’s 200 immigration detention centers are run by private contractors holding asylum seekers and other immigrants accused of administrative violations or awaiting deportation.

The American Civil Liberties Union and Human Rights Watch say private prison companies operate about 80 per cent of beds in the immigration system. GEO Group and CoreCivic are the two biggest contractors.

The private immigration system has grown under presidents of both parties over the last four decades. But as Democrats have largely moved away from supporting private prisons, the industry has aligned itself more with Republicans.

But the share price of both companies have lost 60 per cent of their value since 2017, Trump’s first year in office. They have been accused of mistreating detainees and employees — particularly during the coronavirus pandemic — and relying on low-paid or unpaid detainee labor to reduce costs, allegations they have denied.

And after hitting record highs, ICE’s detainee population has fallen to just over 20,000 now because the Trump administration is quickly expelling most immigrants under an emergency coronavirus declaration.