Home » Latest Articles » US ratchets up hostility towards migrants, refugees

US ratchets up hostility towards migrants, refugees

And in the October month the US took in exactly zero refugees for the first time since records were kept. 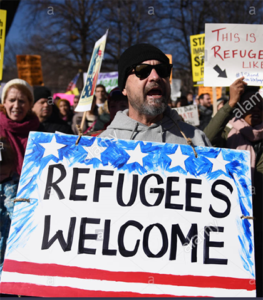 And, in another policy crackdown on migrants and refugees, President Trump has given state and local governments the authority to refuse to accept refugees for the first time in history.

The 18,000 cap for next year would be less than a tenth of the 207,116 admitted in 1980 and last year’s intake of 30,000 saw the US displaced by Canada as the world’s leading country for refugee resettlement, according to the Pew Research Center.

Also, the Trump Administration has proposed an unprecedented series of new fees for asylum-seekers and immigrants hoping to stay in the US.

Under the proposal, a new $US50 fee would be imposed on asylum applications, citizenship applications would see a $US500 price hike, and a new fee would be added for certain immigrants who entered the US as children to renew protections.

Meanwhile, new data from the UN shows an unprecedented 69,550 migrant children were held in US government custody over the past year. The figure is up 42 per cent on the previous year.

Some of these children have already been deported. Some have reunited with family in the US and about 4,000 are still in government custody

The detention of children is part of the Trump Administration’s policy to deter asylum seekers from entering the country. 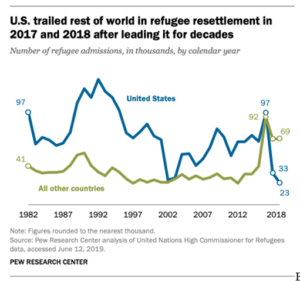 Already about 45,000 asylum seekers have been returned to Mexico under the policy. Unless an appeals court rules otherwise, tens of thousands more asylum applicants could be sent to Mexico to live in conditions that activists claims are substandard and often outright dangerous.

Some reports says that migrants sent back to Mexico under the policy have been robbed, kidnapped for ransom, raped, tortured and killed.

Meanwhile, the US struck so called “safe third country” deals with Honduras, El Salvador, and Guatemala that require migrants to seek asylum first there if they pass through one those countries on their way to the US.

Legal immigration is also in the Trump administration’s cross hairs.

Soon, a new rule aimed at cutting the number of low-income, legal immigrants who get to become US citizens will take effect.

It says that if you are applying to extend a visa or you want to apply for a new one that you cannot have used public benefits you were entitled to, such as food stamps, up to certain monetary limit.

The rule change has already alarm among legal immigrants, some of whom have dropped public benefits altogether for fear it could keep them from gaining citizenship.

Another move has seen the cancellation of the “medical deferred action” program.

The program allowed immigrants with serious medical conditions to stay in the US while undergoing treatment, in some cases for life-threatening diseases.

In August, a letter was sent to about 1,000 immigrants granted the special status informing them without explanation that the program had been cancelled and those who benefited from it could face deportation proceedings in 33 days.

The decision to cancel the program was reversed after a flurry of negative press reports.

Since President Trump took office, the number of deportation cases waiting to be heard in immigration court has more than doubled to just over a million.

And the US Civil Rights Commission has found that waiting times for citizenship applications have also doubled.

Since 1980, more than three million refugees have been resettled in the US. 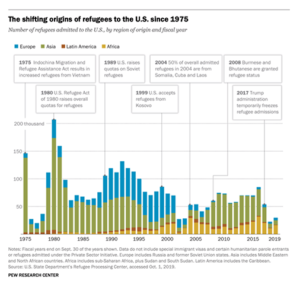 From refugees fleeing Communist countries in the 1980s, to those who faced genocide and ethnic violence in the Balkans and Africa in the 1990s, and now those who have been persecuted by ISIS in the Middle East – the US resettlement program hope to oppressed people across the globe.

For nearly four decades, the US was at the forefront of resettlement for refugees.

The nation was invested heavily in resettlement on a bipartisan basis up until the Trump administration.

Now, activists say the work done over decades and over several Democrat and Republican administrations to improve and expand resettlement capacity and infrastructure is in danger as the US turns its back on the program it promoted for decades.

Former UNHCR Resettlement Officer Larry Yungk says the Trump administration’s dramatic reduction in resettlement opportunities in recent years leaves a void in the international protection regime that will be incredibly difficult to fill, and the implications will be felt globally.

“Communication and cooperation improved among resettlement countries through regular meetings and operational coordination.

“The reality is that resettlement is quite rare. In my years working with refugees, I think the most common misconception I ran into was that most refugees are resettled.

“The truth is, a refugee has less than a one percent chance of being resettled. Resettlement is reserved for a tiny fraction of these people, those least likely to survive the long wait in camps or urban areas. It is a small number, but the move is life-saving for those in greatest peril.

“Only the most vulnerable refugees are resettled, and the US slashing its program makes the slim chance of resettlement for the most needy even slimmer,” Mr Yungk said.