Home » Latest Articles » Who are the Taliban?

Who are the Taliban?

As the US and its allies, including Australia, prepare to exit Afghanistan after two decades, many are worried the Taliban will seize power. We ask:

Who are the Taliban?

The hard-line Islamic Taliban movement has proved to be a formidable fighting force in Afghanistan and a major threat to its government. 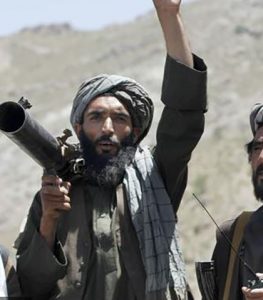 The group was removed from power by a US-led invasion in 2001 but has gradually regained its strength and influenced; and it now controls and more territory than at any point since then.

The Taliban, which means ‘students’ in the Pashto language, emerged in the early 1990s in northern Pakistan following the withdrawal of Soviet troops from Afghanistan.

The predominantly Pashtun movement was first manifest in religious seminaries or madrassas preaching a hard-line form of Sunni Islam and supported by funds largely from Saudi Arabia.

The credo of Taliban was to restore peace and security and enforce their own austere version of Sharia, or Islamic law, once in power.

From south-western Afghanistan, the Taliban quickly extended their influence.

In September 1995 they captured the province of Herat, bordering Iran.

A year later, they captured the Afghan capital, Kabul, overthrowing the regime of President Burhanuddin Rabbani – one of the founding fathers of the Afghan Mujahideen.

By 1998, the Taliban were in control of about 90 per cent of Afghanistan.

Afghans, weary of the Mujahideen’s excesses and infighting after the Soviets were driven out, generally welcomed the Taliban when they first arrived.

Their early popularity was largely due to their success in stamping out corruption, curbing lawlessness and making the roads and the areas under their control safe for business to flourish.

But the Taliban also introduced or supported Islamic punishments – such as public executions of convicted murderers and adulterers, and amputations for those found guilty of theft.

Men were required to grow beards and women had to wear the all-covering burka.

The Taliban banned television, music and cinema, and disapproved of teenage girls going to school.

They were accused of human rights and cultural abuses. In 2001, the Taliban sparked international outrage when they destroyed the famous Bamiyan Buddha statues in central Afghanistan.

Pakistan has always denied that it was an architect of the Taliban’s rise but observers say that many Afghans who initially joined the movement were educated in madrassas in Pakistan.

Pakistan was also one of only three countries, along with Saudi Arabia and the United Arab Emirates (UAE), which recognised the Taliban when they were in power in Afghanistan.

At one point the Taliban threatened to destabilise Pakistan from areas they controlled in the north-west.

In October 2012, the world’s attention again turned to Taliban when the group’s Pakistani arm attacked schoolgirl Malala Yousafzai after she campaigned for schooling for girls.

In 2013, a military offensive greatly reduced the Taliban’s influence. At least three key figures were killed in US drone strikes, including the group’s leader Hakimullah Mehsud.

Following the attacks on the World Trade Center in September 2001, the Taliban were accused of providing a sanctuary to Osama Bin Laden and the al-Qaeda movement who were blamed for the attacks.

On October 7, 2001, a US-led military coalition invaded Afghanistan and by the first week of December the Taliban regime had collapsed.

The group’s then-leader, Mullah Mohammad Omar, and other senior figures evaded capture despite one of the largest manhunts in the world.

Many senior Taliban leaders reportedly took refuge in the Pakistani city of Quetta, from where they guided the Taliban.

But despite large numbers of foreign troops, the Taliban have gradually regained and then extended their influence across Afghanistan, making large areas of the country insecure, and violence in the country has returned to levels not seen since 2001.

In recent years, a series of on-again, off-again peace talks have taken place between the Taliban and the US and Afghan governments.

But it is unclear what will happen when the US and its allies leave the country. One issue facing the opposing sides is the makeup of Afghanistan’s future political system, which is currently an Islamic republic that is modelled on Western-style democracy.

As an extremist Islamist group, the Taliban is seeking to transform the Afghan state into a theocracy. They see the current system as the product of the US “invaders.”

There are also differences over a range of issues, including civil liberties and women’s rights to the country’s name and flag.

The current government in Kabul is seeking to preserve as much of the current constitutional order as possible, including key democratic tenets like women’s rights, free speech, and parliamentary elections.