Construction of Bendigo’s once controversial Islamic Community Centre and mosque has begun more than ten years after being first proposed and in the wake of protests dubbed ‘racist’. 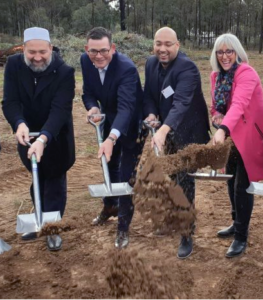 Between 2014 and 2016, the centre was the subject of several objections to the local council which went to the High Court, bankrupting a local councillor pursuing the case.

There were fiery protests in the town over the period the proposal became a focal point for anti-Muslim activists, and their anti-fascist opponents, who travelled from around Australia.

At one protest in 2015 about a thousand people demonstrated against the mosque, most of them not locals.

They had travelled to the central Victorian city from as far afield as Sydney, Queensland and Adelaide. The protest was organised by a nationalist group called the United Patriots Front (UPF).

“Standing alongside Sacred Heart Cathedral and the Great Stupa, the Bendigo Islamic Community Centre will be a further testament to the vibrant and diverse multiculturalism of this great city,” he said.

“We’ll always give Bendigo and its many proud communities the support they need to grow and prosper, including the right to practice their faith in their own place of worship,” the Premier said.

Bendigo Islamic Community Centre spokesperson Dr Aisha Neelam said the centre would be a place to pray, but it would be much more than a mosque.

“It will be somewhere people can meet, hold functions, play sport and even grab a coffee,” she said.

“Everyone will be welcome there, just as they are welcome in any church or community centre,” Dr Neelam said.

A prayer hall, capable of housing up to 375 worshipers, is among the features to be added in subsequent stages.

“The Bendigo Islamic Community Centre will be built around one thing – the Bendigo community,” Dr Neelam said.

“The building will complement its beautiful natural surrounds, and has been designed to deliver a bright, open and welcoming space for everyone.

“We love where we live, we feel welcome here and we want to use this facility to reach out to the Bendigo community.”

Muslims have been part of the Bendigo community since the gold rush.

Dr Neelam, a Bendigo GP, said Muslim families were like any other in Bendigo.

“We work here, we’re your neighbours, our kids go to school here, we volunteer. We love that Bendigo has something for everyone,” she said.

“We have been coming together to pray as a Muslim community in Bendigo since 1997. Our facilities have been pretty limited and we’re excited to be taking this step to build something that is more than a mosque for the whole community to enjoy,” Dr Neelam said.

“The construction of Bendigo’s first Islamic Community Centre will further enhance the city we all know and love,” she said.

“Our great city would not be what it is today without the contribution of so many different cultures,” she said.