The UN Refugee Agency UNHCR has expressed concerned about ongoing violence against foreigners – and especially refugees and asylum-seekers – in South Africa.

At least twelve people have been reported killed since the violence first broke out three months ago. 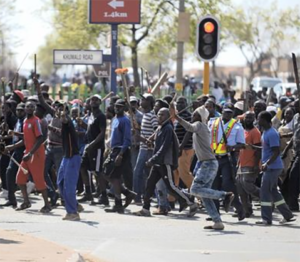 And at least 1500 foreign nationals, mostly migrants but also refugees and asylum-seekers, have been forced to flee their homes as a result of violence or threats.

The UNHCR is bringing in more resources to work on the issue, including experts on child protection and sexual and gender-based violence, as the xenophobic violence outbreaks approach crisis point.

“Our staff are receiving a significant increase in calls to our telephone hotlines in recent weeks, with people reporting that their homes and businesses have been looted, buildings and property have been set on fire, increased gang activity on the streets and rising incidents of sexual and gender-based violence,” UNHCR spokesperson Charlie Yaxley said in a statement.

“Many refugees are now too afraid to go to work or carry out their day-to-day trade, despite having no alternative sources of income,” he said.

“Refugees and asylum-seekers are feeling particularly vulnerable, as their situation is often worsened by a lack of documentation, leaving them struggling to access health care, education and other public services,” Mr Yaxley said.

Around 800 people, mostly from Mozambique, Malawi and Zimbabwe, have sought safety in community halls in Katlehong, near Johannesburg, the UNHCR says.

It says many want to go home, believing they no longer feel safe in South Africa.

“We are strengthening our response and operational presence in South Africa to ensure refugees’ safety, in close coordination with the Government of South Africa, UN agencies through the UN Protection Working Group chaired by UNHCR, and NGO and civil society partners,” Mr Yaxley said.

“We are deploying additional staff and resources, including relief items, emergency shelter, psycho-social care, legal assistance and support with recovery of lost livelihoods. Community dialogues are being established with host communities to strengthen social cohesion,” he said.

The UNHCR has called on South African authorities to take every possible measure to ensure people’s safety and welfare.

“No effort should be spared to quell the violence and enforce rule of law. Those responsible for committing criminal acts must be held to account in court,” It said.

But the plan lacks resources to implement it.

The attacks began in August when foreign-owned shops were looted and foreign truck drivers were attacked in Johannesburg, Pretoria and Durban.

The violence led to further clashes between foreigners and locals.

In an address to the nation last month, President Cyril Ramaphosa said South Africa will not hesitate to act to uphold the law and ensure order and stability where people act with criminal intent, irrespective of their nationality.

President Ramaphosa said his country values its relations with other African countries.

South Africa is host to around 274,000 refugees and asylum-seekers, according to UNHCR.