Young people are more open to immigration and more tolerant of diversity than their parents, according to new research.

And new generation of voters and policy makers, born after 1970, are set to herald in a new era of tolerance and empathy for migrants and refugees. 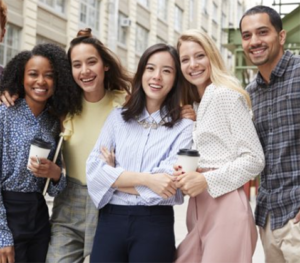 Researchers at the University of Nottingham, in the UK, looked at how feelings about migration change over time among different age groups.

Using public opinion data between 2002 and 2017, the researchers tracked attitudes towards immigration with the aim of detecting whether these changed and whether there were differences between generations.

The study revealed that people born between 1920 and 1960 were typically most hostile to immigration, with those born during the Second World War most hostile of all.

Generations born after 1960 showed a gradual warming in attitudes towards immigration, with Millennials showing considerably more warmth than their fore bears.

Demographically, most western nations have become more diverse since the war, and so it may be no surprise that generations that have grown up with this openness to immigration have been more receptive towards it.

The researchers say this means that younger generations have more contact with immigrants than their elders, but they also came of age during a time when both the social norms around immigration and the public debates on the topic were changing.

“It was a time when there was greater resistance towards intolerance,” they say.

“This can also be combined with easier and cheaper overseas travel, and the growing likelihood that friends or relatives will have worked and lived abroad can also play a part in raising empathy towards the sense of being a ‘foreigner’ in another land,” the researchers says.

They say younger people are increasingly adopting a global cosmopolitan mindset that is characterised by a desire to learn new things, embrace new challenges and understand the world from multiple perspectives.

But they say despite the tremendous advantages such skills and attitudes bring to any team or organisation, the world remains largely run by those born before 1970, where attitudes towards immigration are significantly different.

“These generations make up the bulk of the population and still vote in the largest numbers.  They also retain most of the dominant positions in society, from politics to media, business to culture,” the researcher say.

They says the results of their research suggest that attitudes are changing however and a generational replacement is unfolding as those born after 1970 begin to take a more central role in society.

“We believe this will result in a more positive attitude towards immigration and greater diversity across society in the coming years,” the researchers say.

The researchers say also that living in a foreign country prompts people to reflect on the norms and values, not only of themselves and of their home country, but of their host nation too.

“This spell of reflection proves incredibly powerful in helping that individual understand who they are, and what values define them,” they say.