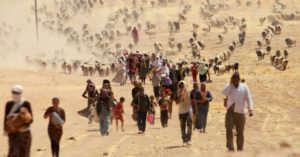 About 143 million people are at risk of becoming ‘climate migrants’ fleeing crop failure, drought and rising sea levels, according to a seminal new report from The World Bank.

The report says climate change will become the single biggest driver of human migration but also that the worst impacts can still be avoided by prompt action.

Titled ‘Groundswell—Preparing for Internal Climate Migration’, the report says most of the population shift will take place in Sub-Saharan Africa, South Asia, and Latin America.

The ground breaking study is part of an initiative focused on the impacts of slow-onset climate change, as opposed to more visibly dramatic events such as extreme storms and flooding.

It also shifts the focus from cross-border migration, which has drawn global attention as refugees and migrants flee war, poverty and oppression, to in-country migration, which involves many more millions of people on the move in search of viable places to live.

Sea-level rise is already prompting the migration of people from Pacific and Oceania island chains and low-lying coastal areas that flood regularly, and areas suffering extreme drought has sent others in search of sustainable farmland, the report says.

Much of the coming migration will shift populations of people over the next three decades from rural areas to urban areas. Unsurprisingly, the poorest people in the poorest countries will be hardest hit, the report says.

The study says there is still reason for optimism: if the world acts in time to reduce greenhouse gas emissions and engages in “robust development planning,” the flood of “climate migrants” could be reduced by 80 percent to a just 40 million people.

“We have a small window now, before the effects of climate change deepen, to prepare the ground for this new reality,” said Kristalina Georgieva, the World Bank CEO.

“Steps cities take to cope with the upward trend of arrivals from rural areas and to improve opportunities for education, training and jobs will pay long-term dividends,” Ms Georgieva said.

The report focuses on three countries as case studies – Ethiopia, Bangladesh and Mexico – and warns that fast-growing cities will have to diversify economically and create climate-resilient jobs to successfully absorb population growth.

It says declining rainfall in Ethiopia’s northern highlands, for example, may drive people out of the country in search of new areas where they can grow rainfed crops. And lack of rainfall in Addis Ababa, Ethiopia’s largest city, may slow its growth.

Alternatively, sea-level rise and storm surges will prompt growth in the major cities of Bangladesh, including the capital city of Dhaka.

The study says Bangladesh will experience greater shifts and changes to population from climate change than any other event.

Mexico, the wealthiest of the trio profiled, is less vulnerable to climate change and better prepared than Ethiopia and Bangladesh.

“But it needs to pay close attention to pockets of poverty,” the study says.

The central plateau around Mexico City and Guatemala City, which may offer better climate conditions, may attract climate migrants.

The study says there’s not much time to act. Without cuts to greenhouse gases and other preparations, climate migration will most likely rise through 2050 and then accelerate, it says.

The report argues that migration can be a “sensible climate change adaptation strategy” – if it is managed carefully and supported by good development policies and targeted investments.

“Poverty reduction and social protection programs targeted at rural areas can help to increase adaptive capacity to climate change, potentially reducing the need for people to move under distress.”

Such strategies could include a range of actions, from investing in climate-smart infrastructure to diversifying the way people generate income and empowering women, the report says.

Ethiopia, for instance, would need to plan for a more diversified economy, absorbing labour into non-agricultural and less climate-sensitive sectors, the report says.