A third of us now born overseas – ABS

Almost a third of all people living in Australia were born overseas, according to new Australia Bureau of Statistics (ABS) data released this week.

More than seven million Australian residents, or nearly 30 per cent of the total population, are foreign-born, with the majority originating from the United Kingdom and China.

The figures reveal insights into the make-up of the Australian population, which reached the 25 million mark in August 2018.

Until the release of these latest numbers, it was commonly cited that a quarter of Australians were born overseas and about half had at least one parent born elsewhere.

Almost one million migrants, or 4 per cent of the population, hail from the UK.

The next most populous group of migrants is from China, with more than 650,000 living in Australia.

He said the majority of migrants have traditionally hailed from the UK.

However, the number of British migrants has dropped from more than one million in 2014 to 992,000, he said.

“Australia is a multicultural society made up of migrants born in every country around the world,” he said.

Roughly 62 per cent of those who arrived here during that time frame were temporary visa holders, 30 per cent of which were international students.

An analysis of the budget figures shows the spile will come in the wake of the federal government’s plan to ease urban congestion by slashing the permanent migrant intake by 30,000 places.

While the government has attempted to lure more migrants to the regions and smaller states, data in the federal budget shows most of the new migrants are likely to go to Melbourne and Sydney.

The Victorian population is forecast to grow by 7.3 per cent over the next three years, NSW by 5.4 per cent and Queensland by 5.1 per cent.

Western Australia and South Australia are only predicted to grow by between 2.3 and 2.6 per cent. 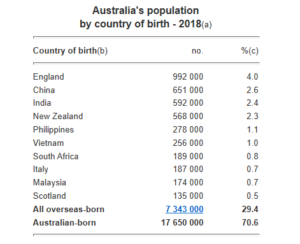 Economists say the budget figures show the government’s population plan will not reduce, but actually increase, the weight of those numbers this year before tailing off slightly to 264,000 by 2022, which is still 5000 higher than the current level due to university students and temporary visas.

Business leaders have warned the policy to cut permanent migrants from 190,000 to 160,000 a year will worsen skill shortages and deter skilled migrants from settling in Australia at a time when the threat of an economic down turn looms.

Australian Chamber of Commerce Chief Executive James Pearson said the government’s migration cuts ignored the evidence of the economic benefit of skilled migration and assumed Australia’s needs would not change.

Economists say the population figures are driving up to half of the economic forecasts and threatening the budget position.