Brought up in India’s male dominated and patriarchal society, migrant couple Harvinder and Saurabh Jain struggled to come to terms with the idea that married women could have lives of their own.

They became caught up in a cultural milieu where after marriage, women are expected to adjust to their husband’s and extended family’s needs. 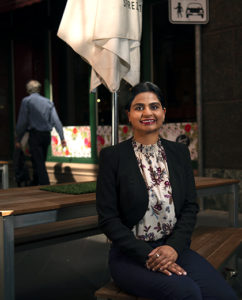 Husband Saurabh was conditioned to believe that he had a right to control most aspects of their lives together and wife Harvinder was brought up to think that her inner yearnings for personal freedoms were foolish.

But the Indian migrant and IT professional found the strength to assert her freedom and individuality, taking control of her life. And Saurabh had the emotional intelligence to realise that a more equal partnership would lead to a stronger marriage.

“After a rough journey, my husband Saurabh and I have rekindled our love. But we could only do that by being honest with each other and with ourselves and by being equal partners,” Harvinder said.

Her story is an illuminating lesson for other women who are the victims of patriarchal cultural norms and customs that repress their personal liberties and subsume their lives into their husband’s authority.

Now Harvinder she has written a book to share her experiences and what she has learned about relationships, family and herself.

‘Wifed in India’ is an inspirational story of one woman’s courage and tenacity in striving for the kind of life she knew she deserved.

A business and data analyst at Australia Post in Melbourne, Harvinder hopes the book will help other women in the suffocating circumstances similar to those in which she found herself. Her Boss, Silvio Giorgio and colleague Tribly Dsouza encouraged her to write the story of the challenges she faced and how she overcame them.

In the book, she pays tribute to her husband who she says, unusually for Indian men, took steps to try to understand the impact of disempowerment on her. 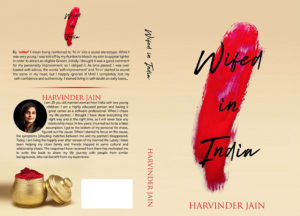 Harvinder’s book sets out her journey from dutiful daughter and wife, through years of childhood abuse and domestic subjugation to her reincarnation as a confident, happy professional woman who is inspiring others to cast off the shackles of cultural stereotypes and address the trauma of childhood abuse.

“My book is about what happens to people when they are raised in a very patriarchal society; how boys and girls are moulded differently and how this can put immense pressure on them when they become adults in a modern world,” she said.

“What happened with us was that there was a power struggle between two educated individuals both believing their view of the world was right, being a woman, I was supposed to give-in, even if both our view points were valid.” Harvinder said.

“We were a married couple fighting social norms in patriarchal society but we have evolved and emerged as equals,” she said.

“Through much of my life’s journey I had been living with this really dominating person, before marriage, my father and after marriage, my husband,” Harvinder said.

“I felt that I had wilfully walked from one problem into another,” Harvinder said.

“Most of my life, I thought I was wrong. Other women would tell me how wonderful it was my husband helped in the kitchen,” she said.

“Our lifestyle was all his way. What appealed to him was what we did and how we lived,” she said.

Harvinder had known Saurabh for eight years before they married in what was an inter-religious love match – not an arranged union. Both sets of parents were uncomfortable about the marriage because Harvinder is a Sikh and Saurabh of the Jain faith.

But the couple married anyway.

“I had known him for eight years but didn’t find out he was so dominating until we were married,” she said.

“I fell pregnant and people said when he has a child, your husband will change. I hoped he would allow me some financial freedom and a say in the financial decisions for the family.

“But he didn’t; and when I left my job to care from my child, I lost a sense of ‘me’. I felt that there was nothing being done on my development. Everything was happening the way he wanted,” Harvinder said.

Then one day she read ‘The Power of Your Subconscious Mind’, a best-selling book on the powers of prayer – which started her thinking about how to resolve her predicament.

Around the same time in 2010, she and Saurabh migrated to Australia – thousands of kilometres from their conservative home city in the Punjab and the cultural imperatives of India’s patriarchal society.

“Friends who were in Australia suggested we come because there is a good life here and children’s education is free,” Harvinder said.

“I hoped that it might be a change of scenery for my husband and that he might change. So we migrated and we got jobs in IT.

“When we first came here, I said I wanted a 50/50 financial arrangement. He agreed but just days later he asked me for my bank account details so he could take manage our wealth as he deemed fit. When I said ‘no’, he got angry.

“From there our relationship dwindled,” she said.

“Kerry advised me to go the Employee Assistance Program at Australia Post. And, initially, my reaction was ‘I don’t want to leave my husband – I have a child’,” Harvinder said.

“But she said the counselling was not about breaking families but resolving conflict,” she said.

“Saurabh said he would not go to counselling as he felt I was trying to take him away from his parents,” Harvinder said.

After yet another argument over finances, Hari and Saurabh separated.

“My husband joined a single Dad’s group while we were separated and came to realise that most common problem with women walking out on marriages was because of bot feeling empowered in their marriage,’ Harvinder said.

“Through the therapy sessions, he also came to understood, that our financial status was about ours as a family and not his individual status, which is a common way of thinking among conservative Indian men.

“He came to understand that it was important for me that we should just have shared financial goals and enjoy our life as family.

“He said: ‘I know what I’ve done to you is irreversible, but I’m ready to change’,” Harvinder said.

“My income is part of my identity and my achievements; and at counselling I said I wanted some financial rules in place if we were to try again.

“Within a year we were together again. We had another child and Saurabh kept his word,” she said.

But Harvinder found it hard to let go of the couple’s acrimonious past.

“We saw a relationship counsellor who told me: ‘if you don’t feel the same way, it’s better you separate’.

“But Indians don’t give up on marriage – and we now have two kids,” Harvinder said to the counsellor.

“Then I met Susan Sandy and Alfred Podhorodecki from Life vision, who listened patiently to every word I said and then recommended that Saurabh and I would need Relationship coaching as a couple and individually, I would need Hypnotherapy to process Post-natal depression and trauma from childhood,” Harvinder said.

“I realised that my husband was also a victim. He was conditioned to be how he was.”

“Even though he treated me better than most men in our society would treat their wife, he now has a new view of relationships.

“Now, I don’t have to thank him for filling the dishwasher, he knows it’s his job too,” Harvinder said.

She says her life with Saurabh and her two children is as good as it can be.

“Life is good now. We have a great lifestyle and a great group of friends,” Harvinder said.

“My children are both boys and I expect them to treat their partners with respect, to give and take and to understand where the other person is coming from,” she said.

And her husband is behind the project.

“I was worried he might be uncomfortable in me telling our story in a book,” Harvinder said.

“But he said ‘why not’ if it brings people back from divorce and helps them resolve their problems.

“I said: ‘aren’t you scared to have our problems exposed in the world?’. He said: ‘People who know us already know our journey and I don’t worry about the rest’,” Harvinder said.

She said she hoped the book would help other women.

“Even if my book makes one life better, my effort is worth it,” Harvinder said.

“Lately, I have been helping people from my community trapped in the same cultural and relationship chaos.

The response I received from them has motivated me to write this book to share my life journey with people from similar backgrounds who might benefit from my experience,” Harvinder said.

Check Harvinder’s Facebook page to get more updates about her book: https://www.facebook.com/wifedInIndia/