The broad sunlit fruit blocks and paddocks of Mildura are a world away from forested hills of Burundi.

But for one Burundian refugee, life in the Victorian city is offering the chance to rebuild a way of life lost in the turmoil and violence of his homeland’s interminable civil strife.

Jean Claude Nsabimana was shot in both legs by a gang of armed thugs who also shot and killed his younger brother when his family became the victims of ethnic-based sectarian violence.

Jean Claude says he had a good life working as a bus driver and taxi owner in his homeland before the conflict broke out. 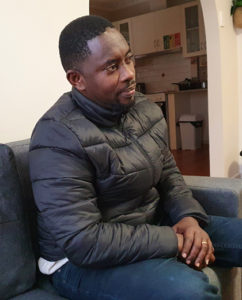 But the war cost him his home, his job and very nearly his life – and left him with a disability.

After fleeing with his family, he endured more than four years of precarious life in refugee camps in Rwanda and Kenya before being resettled in Australia.

Ethnic tensions have been bubbling under the surface in Burundi, one of the poorest countries in the world, as a result of the civil war that caused the deaths of more than 300,000 people between 1993 and 2005.

Violence between Hutu groups and the minority Tutsis flared again in April 2015 when President Pierre Nkurunziza announced he would seek an unconstitutional third term in office.

A failed army coup in May saw hundreds killed and tens of thousands more flee the country. Jean Claude was caught up in the turbulence.

“My problems started in 2015. Because I am an ethnic Tutsi, I was targeted,” Jean Claude said.

“I had been in a relationship with a women from the Hutu ethnic group and we had a daughter together,” he said.

“Because of the relationship a group of Hutu men came and asked me to join their group. When I refused, my problems started and I had many troubles.

“These men insisted that I join them and I continued to refuse. One day the men came to my family house and attacked us. They shot dead my younger brother and they shot me in the legs.

“When we were attacked, our neighbours came to help us and the gunmen left.

“My wife Dancila contacted the Red Cross and I was taken to hospital. I had surgery but the doctors could only fix one of my legs,” he said.

Jean Claude said that while in hospital, he continued to be a target for the gunmen.

“After that, the Red Cross came and heard my problem and took me to Rwanda. At first I was in hospital. I had mote surgery but my leg could not be saved and it was amputated.

“UNHCR paid all my medical bills and eventually took me to a refugee camp in Rwanda. I stayed there for two and half years with my wife and kids.

“But while I was in the camp, a lot of people from Burundi came and I was harassed again,” he said.

Jean Claude and his family were moved to the giant Kakuma refugee camp in Kenya, one of the world’s largest, which is currently home to more than 190,000 displaced people.

“We were at Kakuma for two years. Life was not easy. I was disabled and it was difficult to do much,” Jean Claude said.

With Jean Claude safe from Hutu retribution, the gangs turned their attention to his mother and father.

“Because they couldn’t get to me, the Hutu groups attacked my father and mother. So, they came to the camp in Kenya, where they still live,” he said.

“But I don’t know what happened to my three siblings. They fled the violence and we don’t know where they are,” he said.

Jean Claude, Dancila and their four children were resettled in Australia in November 2019.

Since then, they have become part of the thriving Burundian community in Mildura, in Victoria’s Sunraysia district.

Jean Claude is involved with the local Burundian community church, delivering sermons with the support of the church pastor.

In Mildura, the family have been supported by refugee and migrant settlement agency AMES Australia to obtain affordable long term housing and complete an orientation program.

Jean Claude said the funding would help him achieve independence and support his family.

“I would like to be able to build my domestic and social skills so I can build my independence,” he said.

“I would also like support to enable me to increase my mobility to allow me to provide for my family,” Jean Claude said.

He said that he was grateful to have a chance at a new life in Australia.

“Living in Mildura is good. My family is safe but I would like to bring my parents here to live because I worry about them,” Jean Claude said.

“Also, my daughter in Burundi is vulnerable. She is being harassed and schools will not take her. I send her money but she is not being looked after. I would like to bring her here, but I’m not sure what to do,” he said.

Jean Claude said that with support from the NDIS, he hoped to overcome his disability and resume his career as a professional driver.

“Before the conflict in Burundi my life was good. I had a house and a car and I ran a transport business as a taxi driver and bus driver,” he said.

“I would like to get my driving licences and eventually set up a transport business here in Mildura,” Jean Claude said.