Nations have pledged more than $US3 billion to support refugees and about 50,000 resettlement places, the United Nations refugee agency said this month at the end of a major conference on human displacement.

United Nations High Commissioner for Refugees Filippo Grandi said that the Global Forum on Refugees had broadened responsibility-sharing for 25.9 million refugees who have fled war and persecution, mainly exiled in poor neighbouring countries.

Mr Grandi told a final news conference that the $US3 billion was in addition to the World Bank and other pledges. The private sector pledged $US250 million, but all the figures were preliminary, Mr Grandi said. 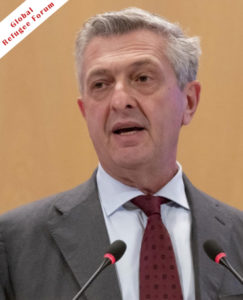 Germany, which has taken in hundreds of thousands of Syrian refugees, pledged some 1.7 billion euros, Mr Grandi said. The Inter-American Development Bank pledged $US1 billion to communities hosting refugees in Latin America, while the World Bank announced it was expanding funding for projects supporting refugees by 10 per cent to $US2.2 billion, Mr Grandi said.

States pledged 50,000 new resettlement and other legal pathways for refugees to remain in host countries, he said.

The administration of US President Donald Trump said in September that it planned to allow only 18,000 refugees to resettle in the United States in the 2020 fiscal year, the lowest number in the history of the modern refugee program.

“The reality is there has been no real systematic burden – and responsibility-sharing,” he said.

“We cannot go into a world in which responsibility-sharing means some states keep all the refugees and some states pay all the money. We cannot do that. That is why we have resettlement, why we have different types of partnerships.

“That is why asylum has to remain a reality in all parts of the world, including in the rich countries and even more in rich countries that have so many responsibilities,” Mr Grandi said.

The historic meeting wrapped this week with wide-ranging and substantial commitments to help millions of refugees and the communities they live in worldwide, including important pledges of new long-term support for their inclusion.

“I want to salute the efforts pledged by many countries — both donors and by host countries — and by business leaders, civil society and refugees themselves, to redouble efforts in support of refugee inclusion, self-reliance and solutions,” Mr Grandi told the closing session at the first-ever Global Refugee Forum.

“The energy and commitment that has resonated over the last three days is a testimony that despite a difficult global environment, there is a shared commitment to protecting those fleeing in search of refuge,” he said.

The Forum met in Geneva at a moment when 70.8 million people are forcibly displaced worldwide, including 25.9 million refugees.

It sought to reboot responses to the millions uprooted by wars and persecution as well as the communities that host them – most in developing in countries.

As the gathering drew to a close, more than 770 pledges had been made by by heads of state and government, UN leaders, international institutions, development organizations, business leaders and civil society representatives among the 3,000 attendees.

Further pledges are expected in the near future.

They aim to boost support for inclusion and long-term development needs in host communities – recognition that for the majority of refugees worldwide, exile frequently stretches out for years or even decades.

More than US$250 million in pledges by business underlined the growing role of the private sector in mobilizing vital resources to support millions of refugees worldwide.

At least 15,000 jobs will be available to refugees through these initiatives. There will also be some 125,000 hours per year of pro bono legal counselling.

Mr Grandi urged all participants to sustain the momentum and deliver on their promises.

“This has the makings of a success. Making it a success is incumbent on all of us,” he said.

The Forum is a key element of the Global Compact on Refugees, a framework for more predictable and equitable responsibility-sharing affirmed by the UN General Assembly a year ago.

Refugee participation was key throughout. Around 80 men and women from Africa, the Americas, Asia and the Middle East attended dozens of panels and events, ranging from sessions on education, sustainable energy and sport to livelihoods and mental health.

Discussions at the Forum focused on six key areas: arrangements for burden and responsibility sharing; education; jobs and livelihoods; energy and infrastructure; solutions; and protection capacity.