Hussam AL-Arrakee’s life has been punctuated with war and conflict.

Born in the middle of the eight-year Iran-Iraq war, he has rarely experienced times of peace.

And, as a filmmaker and radio journalist, he has seen much of that strife up close – often through the lens of a camera.

But ironically, it was his work on a film called ‘The Age of Chaos’ exposing official corruption in post-war Iraq that finally forced Hussam to flee his homeland.

Now a refugee living in Australia, Hussam is attempting to rebuild his career in film and the broadcast media.

“All my life there seems to have been in war. I think I am lucky to still alive,” Hussam said.

“But I’ve lost lots of people through the conflict. Extended family members, friends and many Co-workers. There would not be a family in Iraq which has not lost family members,” he said. 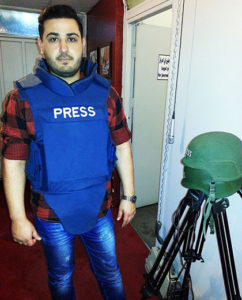 As a journalist covering the long list of conflict that has beset Iraq, Hussam was subjected to more danger than most people.

“Everyone in Iraq was in danger during these periods. But as a journalist you are in more danger from different directions,” he said.

“As independent media, we could be targeted by the government if we questioned their actions and policies. And we were always targeting from ISIS because ISIS doesn’t believe in the media especially after 2003. They believe all of the media is linked to the US and they are all traitors to their country,” Hussam said.

Hussam was born in 1985 at the height of the brutal war between Iran and Iraq.

“Even though I was young, I remember that time. Our house always seemed to be dark. There was not electricity and not enough food,” he said.

“Then in 1990 Saddam invaded Kuwait and we had war again”.

In an operation codenamed ‘Desert Shield’ an overwhelming military force from a coalition of 35 nations attacked Iraqi forces in Kuwait and displaced them in around 100 hours.

Economic sanctions imposed on Iraq in the aftermath of the war saw Iraqi civilians again face shortages of food, medicine and lack of the public services.

“In 1991 we had the uprisings of the Kurds in the north and the Shias in the south,” Hussam said.

Saddam Hussein’s Baathist Party managed to maintain control over the capital of Baghdad and a in a brutal campaign spearheaded by the Iraqi Republican Guard, the rebels at least in the south were suppressed.

During the month-long period of unrest, tens of thousands of people died and nearly two million people were displaced. After the conflict, the Iraqi government intensified a prior systematic forced relocation of the Marsh Arabs in the south.

In the north, however, the Kurds were able to establish the Kurdish Autonomous Republic.

“After 1991 the situation was quiet for a while. Saddam has crushed all the opposition to him. And no one were able to speak against him,” Hussam said.

“You had to sign a paper to say that you agreed with his policies and join his party if you wanted to continue your study or work.

“My parents never allowed me to say anything about Saddam, even inside our house.

“I’m not a great fan of Saddam but I never saw him do anything bad to ordinary people who were not involved in politics. My father, who was a doctor, and my family never talked about the government. They didn’t want the trouble it might bring our family.

“And when you look back things were safer under Saddam than afterwards. After 2003 the law became very weak and the corruption in every part in the government,” he said.

Hussam told one time his house being shot at by a neighbour.

“When we went to the police about this, they said we had to pay. And the police were scared of these people with guns anyway,” he said.

“Since 2003 there has been no real law. There’s just a group of people who control everything and steal everything they can. The country is not really free.

“And what happens in Iraq has always been influenced by the proxy war with Iran, Saudi Arabia and the US pulling strings.

“We saw that after 2011 when US power diminished, Iran stepped in and now has a lot of influence on what happens.”

Hussam’s career has followed the recent political machinations in his country. He became a journalist in 2004 as the media in Iraq opened up under US patronage.

“Before the war there were just three media organisations who all really just put out propaganda for Saddam. Then suddenly there were almost 28 TV and radio channels and it was a good opportunity to work in the media as this what I was studying,” he said.

Hussam covered the sectarian fighting that arose after the fall of Saddam. He had access to the ‘Green Zone’, where the US mission and the central government was headquartered and he often covered stories armed with weapons.

Hussam has had some near misses in his dangerous but vital work.

“In one incident a bomb exploded two seconds after I’d driven over it. The windscreens on my car were blow out and I felt the concussion wave from the bomb. It’s difficult to describe the terror unless you experience it.

“But all Iraqi people has experienced at least two or three close calls they’ve had with bombs – but thousands of people have been killed in bombings especially in Baghdad and other cities,” Hussam said.

Between 2006 and 2009 Hussam covered the fighting between rival Sunni and Shia militias.

“Our TV channel was identified with one of the sects, even though it was independent, and it was targeted. Lots of my friends were killed working as journalists,” Hussam said.

“One morning when I was going to University, I saw people who had been killed in the street. They had been shot because of the Shia-Sunni conflict. This conflict is used to control people who are uneducated.

“And because of wars in Iraq, there are a lot of uneducated people in Iraq,” he said.

Hussam left Iraq in 2013. He was forced to flee after he directed a short film called ‘The Age of Chaos’ which exposed official corruption and a lack of public services in Iraq.

“When the film broadcast on the TV, one of our team members who contributed in this film work was killed and all the others escaped of Iraq. It was a scary time. Another of the crew was abducted by government people. This was when Nouri Al-Maliki was Prime Minister,” he said.

“In Iraq people can get killed just for sharing the truth with others. That’s what we did with the film,” Hussam said.

He was also working as a TV journalist often working double shifts to report on the violence and political turmoil going on around him.

“It was sad to see people killed and injured but professionally it was very interesting and I was proud of the work we were doing trying to tell people the truth about things in Iraq.

“And I was proud to work with people risking their lives for what they believed in freedom journalism in Iraq,” he said.

Hussam went to Malaysia and Indonesia and registered with the UNHCR. He believes that it was because of his work on the ‘The Age of Chaos’ film, his visa was approved and he was settled in Adelaide in 2017, where his brother had settled earlier.

Hussam has started his own media production company in Adelaide specialising in videography, photography and design but also hopes to find work in broadcast media.

He says he is enjoying life in Australia.

“People here don’t care how you look or what you are wearing or your car. People don’t look down on you,” he said.

“Australia has the rule of law while there is no law in my country especially 2003.

“Once we had a respectful society with respect for all religions. But after 2003, Iranian supported Shia terrorists targeted the Christians and others and most of them left. The Christians – the Assyrians – were the original inhabitants of Iraq.

“People here are nice to each other. I’m grateful to still be alive and to be living in such a healthy environment.

“I want to thank the Australian government for giving me the chance to live among Australians. I want to take that opportunity and prove that I can make contribution,” Hussam said.