Home » Lead story » Fighting for his community - a refugee’s mission

Fighting for his community – a refugee’s mission 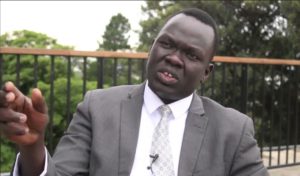 The Second Sudanese Civil War took Richard Deng’s father and forced him to flee alone into the chaotic life of a refugee.

Almost two decades on, he is harnessing his memories of those experiences to develop mutual understanding between refugees and Australians.

“Everybody needs someone to help show them the way, to understand and help to guide them,” Richard said.

Having arrived in Australia in 2003 with nothing, he now employs his experiences towards building support and understanding between refugees and their adopted nation.

Richard works as a member of the recently formed African-Australian Community Taskforce assembled by Victoria Police, as an advisor to Victoria’s Department of Health and Human Services and as a long-standing South Sudanese community leader and advocate.

As a teenager, he experienced first-hand what it is to flee violence, into the danger and disorder of refugee camps, and finally to a vastly foreign country oceans away from all personal and cultural connections.

After the political murder of his Father, Richard was forced to flee alone from his hometown of Tonj, in what is now South Sudan. At 18, he became one of countless individuals displaced by Sudan’s brutal half-decade of civil wars.

“Since our independence we have had division, and violence,” he said.

“There were very brave people, who would help to sneak you out of the country.

“The country was under very tight control, during the day there were gunships that patrolled the border, watching for people trying to escape, so we had to go at night.

The government didn’t want people telling the Americans or Australians governments what was happening there,” Richard said.

“We were transported to the Ugandan border, where we were handed to the United Nations and taken to the camp. The government in Sudan was still monitoring those figures who could be of danger to them, so it was unsafe, and the United Nations then brought me to the Kakuma refugee camp in Kenya,” he remembers.

Even in international hands, however, Richard remained in danger.

“The government of Kenya allowed us there, but it wasn’t safe,” he said.

“There was not any community, because people came and went so quickly. I can best describe it as chaos. Many people were killed, people would be murdered at night. I knew I had to continue forward.

“It was very hard. People should know why refugees come, sometimes war or a natural disaster, but it is not because they wanted to. Of course, they still must choose where to go, and Australia is a very good place, where I had heard you can have good opportunities,” he said.

Fortunately, Richard had one distant family member already in Australia, who agreed to sponsor him in order to secure his safety. He had escaped and found security, though his challenges continued.

“When the application was made I did my interview and I passed. Then I had to get here and I was by myself, without my family,” he said.

“There are ways in which you must adapt yourself. For example, in my country we never swear unless we are angry,” he laughs.

“I found it very strange the way people speak to one another here, in a way that in my country would be rude, but here it is between good friends, and it is okay.

“I had to bring myself out, to learn how to use the trains, meet people and find work. To be honest, the support system was inadequate.

“You are left alone, to do it yourself. Then there was no one-on-one support for new arrivals. I had to learn the computer myself, how to get myself into university and my own accommodation. It took me 7 years to get on my feet here,” he said.

But Richard persevered. He speaks at length about his struggle to understand his adopted nation and succeed, yet today he is employed as an expert about how best to help individuals such as him to do so.

“What kept me alive is the struggle that I’d been through, the challenges I’d faced on my way to Australia. I held my head up knowing that life would change,” he said.

“I found my feet after I went to Uni and finished my study. After that I could see the light, and I thought that I should be an example and give to the community.

“After I began my advocacy work for the community that changed my life, and turned my life around. It is possible to turn your life around, doesn’t matter about your situation or age.

“Compared to when I arrived 15 years ago until now the government has listened, there have been changes at the grassroots levels.

“Instead of service providers waiting for the refugees to come to them, the services are actually being delivered. In this sense the system has actually improved,” he said.

It is through the work of people like Richard that such changes are and must continue to be enacted. Within refugee community, he seeks to help people understand Australia.

Within broader Victoria, his work as an advocate and with Victoria Police seeks to make authorities better understand how to handle refugees, to everyone’s benefit.

“I remember how difficult it was to arrive here as a 21-year-old, with some education and English,” he said.

“Some arrive here at 14 or 16, with no English, and it is very hard. There are many from big families and with single mothers. It is hard to maintain or control.” he says of the current controversy around African youth.

“We cannot simply place them in jail. They go to jail for 4, 5 years, and when they come out, what have they learnt? That is not a positive place for them to learn how to act, it doesn’t work,” Richard said.

“We must work to ensure that the children stay engaged. They come here with maybe some education, and are placed into school,” he said.

“They find it very difficult, they feel different to the other children, and they become disengaged. They drop out, and then how will they learn?

“We must help them to see their potential, not to disengage from authority. They have many obstacles to overcome.

“Some people want to say things in order to bring fear, but it makes the problem worse. Violence has no colour and we cannot simplify the issue. There was violence here long before we came,” he said.

Richard has five children with his wife, including two year-old twins, for whom he counts his blessings.

Yet back in South Sudan, internal divisions continue to produce violence, disrupting lives and displacing its citizens, and recent developments in government policy have left him heartbroken.

“Here my children have a chance in life to be disrupted. Now I have the opportunity to support my family, to support my wife and my Mother back in Sudan as well,” Richard said.

“I was very happy to find that my Mother and Sister are still alive, and I was able to bring my Wife here. I tried to bring the rest of my family, but it did not work,” he said.

“Our government has stopped the entrance of South Sudanese refugees. For people like myself who have relatives in dire situations we cannot even sponsor my family to come here.

“My Mother is in Uganda and I cannot sponsor her to come here even for a visit. The focus has shifted to Syria and other countries.

“The war in Syria and the war in South Sudan are the same, so it is very sad to see our government turn its back on a country that still needs support. Especially in the case of family reunion, my mother and sisters are still in the war, because the government won’t allow them to come.

“Families are torn apart. Living here without family is just complicated. That needs to change, from the government, to allow broken families to be reunited. It is difficult.

“Still, there is fighting, people dying. We must have love for one another,” Richard said.