“This country gave me everything that I dreamed of as a little girl but could never have achieved in my homeland.” 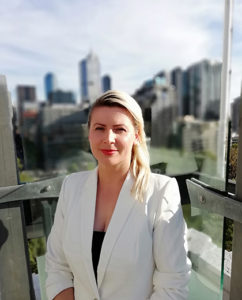 This is how Kosovar-Albanian refugee Mirisha Bowler sums up the experience of fleeing her war-torn homeland and building a new life in Australia.

“Coming here was like starting a new life. It was fantastic. I could not believe the Australian Government and the people here would look after us as they did,” she said.

“They sorted out everything we needed from accommodation to health care. We were supported financially. In Kosovo I would never have dreamed this would happen.”

“Coming to this country gave me the opportunities and the help I needed.

“With the support and opportunities I was given, I learned the language, I studied and started a career, I bought a house and I met a wonderful man and got married. These things could never have happened in Kosovo,” she said.

Mirisha is sharing her story as way of acknowledging the society and the individuals who have helped her on her remarkable journey from rural idyll through war, the loss of loved ones, exile from her homeland and ultimately a new life on the other side of the world.

“When I was small I grew up in a big family. There were ten kids and we lived on a small farm,” Mirisha said.

“We had cows and a garden. They were happy times. We lived a normal life and we were an ordinary family”, she said.

But that all changed when war came.

Kosovo had been a semi-autonomous part of the old Yugoslavia, populated mostly by Albanians, and until the death of Marshall Tito in 1980 had existed harmoniously with the other constituent parts of the country.

Tito’s death brought a period of political instability and an economic recession leading to the rise of nationalist movements across Yugoslavia.

The hard-line communists running the country after Tito sent troops to crush these movements. In Kosovo this resulted in the arrest and internment of more than half a million people. Eventually, the rise of Slobodan Milosevic and his plans for ‘Greater Serbia’ led to a war that claimed more than 13,500 lives and led to the displacement of 1.4 million people.

“Just as I was finishing primary school things started to get really bad. The Serbs closed our Albanian language schools and we had to study in private schools,” Mirisha said.

“The police would stop people in the street just for being Albanian and my brother was arrested and beaten up just for carrying an Albanian school text book,” she said.

When full-scale fighting broke out in 1999, Mirisha and her family were forced to flee their idyllic farmhouse near the town of Qendresa.

“We had to leave the house and run. The Serbs were killing people and burning down houses. These weren’t militia groups, this was the Serbian army and they had tanks and machine guns,” Mirisha said.

“I lost a cousin in the fighting and saw people killed in the street. I saw so much, for a long time thinking about it made me feel very emotional,” she said.

The family was forced to move from village to village, moving secretly and often at night, staying with friends and evading Serbian soldiers.

“Often we would get separated because there were ten of us and we could not contact each other because we had no mobile phones and there was very often no electricity,” Mirisha said.

After a year the fighting ended with the intervention of NATO forces. But at first, this precipitated a mass expulsion of Kosovar Albanians as the Yugoslav forces continued to fight during the aerial bombing of Yugoslavia.

The war ended with the Kumanovo Treaty which saw Yugoslav and Serb forces agree to withdraw from Kosovo to make way for an international presence. In 2001 a UN administered Supreme Court, based in Kosovo, found that there had been “a systematic campaign of terror, including murders, rapes, arsons and severe maltreatments”.

When Mirisha and her family returned to their home, it had been destroyed and the family lived in a farm shed for a time.

“Life was very hard for us but we were lucky in that at least we had some land that we could grow food. For many people the humanitarian airdrops of food were the only things that kept people alive,” Mirisha said.

“People were starving and everything had been destroyed,” she said.

With life untenable for her and unable to get a job despite having teaching qualifications, Mirisha and her then boyfriend joined the exodus to Albania.

“I had no money and had no idea what the future would hold – but I knew I couldn’t stay in Kosovo. My boyfriend had an uncle in Australia and so we were able to come here as refugees,” Mirisha said.

Mirisha studied English with migrant and refugee settlement agency AMES Australia and then went to TAFE to study tourism and hospitality.

She now works as a Duty Manager at the Radisson Hotel in Melbourne.

“I love my job and I love the people I work with who have supported and nurtured me,” Mirisha said.

“And I’m grateful to the Australian Government and taxpayers for giving people like me the opportunity to study and to build a new life.

“Australians need to know how much they have done for people like me. Because of that I want to respect this country and I want to give back.

“My teacher at AMES Jenny Monteiro, my friends Lisa and Leah especially have been especially supportive.

“And my husband Phillip has been my angel. He has supported me and let me be who I am,” she said.

Mirisha supports financially her parents and three siblings who remain in Kosovo; she has six siblings living in Germany.

“Australians need to know they have not just helped me but also my family in Kosovo, where people still struggle because the country has never really recovered from the war,” she said.

“We are a close family and it was that closeness that helped us survive the war.”

Mirisha recently visited Kosovo to see her parents and attend her nephew’s wedding.

“It was great to see all of my family and friends. And it was wonderful to be in my homeland again. I love Kosovo but I love Australia too and this is my home now,” she said.