After being forced to leave behind an affluent and successful life in Pakistan, refugee Alia Sultana has rebuilt her life through her passion for food and her knack for business.

When she and her family arrived in Australia, they had little more than could be carried in a suitcase.

But through hard work, an entrepreneurial spirit and a passion for cooking, Alia has created a new life for her and her family in Melbourne’s south east.

An ethnic Hazara, Alia’s family have lived in Pakistan for generations after they were forced to flee Afghanistan last century because of persecution.

“My forefathers migrated to Pakistan from Afghanistan in 1895. My parents, myself and my children were all born in Pakistan. We call ourselves Hazaras from Pakistan,” Alia said.

She said her family had a good life growing up in the city of Quetta, in Pakistan’s north-west.

“Our life was good. I have four children – two sons and two daughters, all well-educated, and we were happy,” she said.

“Although I have a Bachelor of Psychology, I never practiced as a psychologist because in my culture it was my duty to bring up the children,” Alia said.

Her husband Haji Afzal was a well-known businessman in Quetta and a member of the Chamber of Commerce. He was a pharmacist who, with his doctor brother, owned a pharmacy and a medical clinic in the city.

But as racial and religious tensions increased in Pakistan, Alia’s family’s fortunes took a turn for the worse.

With Alia’s daughter studying Design at Deakin University, the family came to Melbourne for her convocation.

“At that time we were invited by the Uni to attend my daughter’s convocation here. So we came, myself, my husband and my younger daughter came here on a visitor’s visa,” Alia said.

“At the time, my husband had gotten threats from Muslim extremists that he would be killed – and my uncle had already been assassinated by them,” she said.

“So we had left Quetta and lived in Karachi for almost two years. From Karachi we came here on a visitor’s visa to Melbourne.

“But the situation in Quetta got much worse for Shia Muslims, and particularly Hazaras, at that time in 2011.

“So, most of our relatives were telling us not to come back. My husband’s friend he was insisting that he not come back. He said his name was on top of the list the extremists had,” Alia said.

“Because my husband was a successful businessman, he became a target. Our Pharmacy was attacked twice.

“Luckily at the time, my husband wasn’t in Quetta so he was saved. But then we decided we couldn’t go back because it was not safe,” she said.

After arriving in Australia in October 2011, it became clear that the family would be in danger if they went back to Pakistan.

They had left behind businesses, wealth and property in Pakistan and had to start from scratch.

“We arrived with one suitcase and two or three pieces of clothing each. And we didn’t have much money,” Alia said.

“It was really difficult. The money we brought here was not enough. It was very expensive to live here and no one provided us with any kind of help. We applied for a protection visa,” she said.

“Although my daughter got her master’s degree there was no job for her. We were on bridging visas and she did not have Australian experience. It was a very tough time for us,” Alia said.

“My daughter started working as a waitress and I started volunteering with different organisations. I used to help other migrants and refugees with English classes and computer classes,” she said.

At the time Alia helped found Sisterworks, a charity that helps refugee women set up businesses. 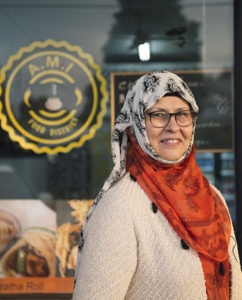 And through the connection with Sisterworks, Alia found her own pathway into business.

“At that time, I cooked for the group and they always said, ‘why aren’t you starting your own business – you are a very good cook’,” Alia said.

“So the first time in 2014, I catered for a fundraiser for Sisterworks. That was the beginning of my business,” she said.

In 2018 she opened her food shop and catering business in Dandenong.

“I cater for the Hazara community as well as local people,” she said.

Now a citizen, Alia plans to grow her business with plans for another restaurant in Richmond or Carlton.

“Now I feel very good about things. We have a business, we have a home. My younger daughter is studying medicine at Monash University,” she said.

“My elder daughter works as an audit officer with NDIS. She is married and lives with her husband and they are all doing well,” Alia said.

Alia and her husband have recently bought a house.

“In 2011 when we first came here, I felt my family were safe and secure. But now, I have everything and I am very happy,” she said.

“Australia gave us everything although it was very tough in the beginning. But now is the time for me to give back to Australia,” Alia said.

“My daughters, me and my sons are all working and paying tax and trying to help people however we can,” she said.

Alia says her journey as a refugee has been tough at times but ultimately worth it.

“I would say to people on similar refugee journeys, ‘the hard times will go with the passage of time but you should work and be passionate about what you are doing’,” Alia said.