From the Taliban to Tasmania – Afghan refugees find a home

Two Afghan brothers who escaped the Taliban, survived ruthless people smugglers and a perilous journey across a war-torn landscape have found peace and a welcoming community in Launceston.

“We are Hazaras, and as you might know, there are two main types of Muslims- Shia and Sunni,” says 23-year-old small-business owner Yousef Mohammadi.

“We are Shia, the Taliban were Sunni, and they had the imagination that if you kill Hazara people you get a key into heaven,” Yousef said.

“Almost everyone has left our town because it was a very remote area, so the government could not support us, and the town had to protect itself. We had our own soldiers from our own village, they used to defend the town themselves,” he said.

Yousef and his younger brother Yasin only experienced rural Afghanistan as babies, yet the country’s turbulence still drastically shifted the course of their lives.

Like many Hazara people, the Taliban’s rise meant a displacement and insecurity that has passed down through generations. Unlike many, they’ve come through an unlikely journey of fear and danger to become small-business owners and students in Tasmania at just 23 and 22 years-old.

The boys’ family members have recounted to them a time where there were no safe options. Their father made the bold move to organise their passage out of Afghanistan. 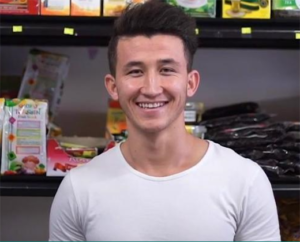 “We came to Pakistan via human traffickers – they were unreliable, we couldn’t trust whether they would get us somewhere safe or do something bad to us or kidnap us. we came through in trucks, all in all it was a terrible time,” says Yousef.

Their journey took them first to Pakistan, where they lived in fear for another two months while waiting until they could enter Iran to join their father.

“In Pakistan and Afghanistan, the border is the same, so the same Taliban that were working in Afghanistan were somehow in Pakistan as well. It was a different place but the same threat,” Yousef says.

“We had no documents to get legally into Iran, so we organised with human traffickers again. Once we were there, they gave us migrant cards and we were able to stay.

“It was only once we got to Iran that we could feel safe. In Iran you would only see that people weren’t behaving towards you in a nice way, but they did not have the same terrorist groups threatening people’s lives,” he says.

The family settled in Sirjan for a period, before moving to Neyriz. Yasin remembers that for a long time they were quite happy there, his life revolving around school and football while his father supported them by working at a stone factory.

In many ways, this is the first place the boys had a real home. Eventually, however, as the numbers of refugees coming across the border increased, they were reminded that wasn’t the case, and that they were no longer welcome.

“Around 2010, Yousef left for India to study. He used to study in Neyriz, but then they didn’t allow us to study anymore because we were migrants and they took away our migrant cards. We were not allowed to stay in Neyriz so we moved to Kazeroon,” Yasin says.

At the same time, the boys’ father had an accident at work, badly injuring an arm and a leg.

At 17, it became Yasin’s responsibility to support his parents, his two younger brothers born in Iran, and his older brother studying overseas.

In the morning he continued to study, but every afternoon and evening and all weekend he worked in a friend’s shop.

The situation was unsustainable, so they were searching for options. Eventually, after a year they found help, through the UNHCR’s refugee program.

They were resettled in Tasmania, about as far from the Middle East in culture, geography and distance as you could imagine.  And they fell in love with the place.

“It was very hard, but we were very excited. After the situation we had in Iran, it was terrible, but when we first came to Tasmania, we were so excited, the weather was so nice at that time,” Yasin says.

“I remember the bushes around Tasmania, when we came from the airport to the city, I just thought the bushes in the street were so different!

“We are very happy to be here you know, it’s one of the best places to be, I’ve been to the mainland, but Tasmania is still better,” he says.

With Yousef still in India, none of the family in Australia could speak any English.

Volunteers from the  Migrant Resource Centre Tasmania taught them how to get around, how to order things and function, and the boys found community in the same way as in Iran, establishing friendships and self-worth through soccer, a sport in which they excel.

“I used to talk to friends by using my hands, because I was unable to communicate verbally,” says Yasin.

“But I went to college when I came here, I studied year 11 and 12, got some English and learnt how to write, made some friends through soccer, through a soccer club called Northern Rangers.”

“I used to play at the highest level in Tasmania, which is called NPL,” he says.

Now, however, the brothers are focused on establishing themselves with financial stability and careers.

When Yousef arrived from India with strong English, the first thing he wanted to do was start a business, to make something happen for himself and his family.

The brothers have now launched ‘Tasmanian Hazara Market’ in the Launceston CBD. The shop is a connection to the Middle East for themselves and the Afghan community in Launceston, selling various dried foods and fruits, spices, furniture and hand-carved rocks from the Middle East and particularly Iran.

“We have a lot of Afghan families in Launceston, that’s a very good for them to have their own cultural thing available to them,” says Yasin.

“We also get a lot of Australian people coming through, they’re loving it! Especially the rocks, they are custom made in Persia, in Iran so they are very nice and attractive.

“It’s going very good, we’ve been open for two years almost and we get a lot of Australian and African customers as well, so it’s getting better every month and every day.

“We are loving living here, there are a lot of soccer clubs in Launceston and we have been playing soccer for a long time, my little brother plays for Launceston united soccer club, he’s making a lot of friends through soccer, he is loving it!” he says.

For Yasin, he has recently completed a university preparation course, with an eye to starting a Social Sciences degree next year.

At 23 and 22, the brothers are now the proprietors of a functioning business, engaged with the opportunity to keep extending their education in a place where they feel safe and welcome.

Asked what it feels like to be where he is now, reflecting on their beginning as toddlers being ferried through a warzone in the trucks of human traffickers, Yasin is lost for words.